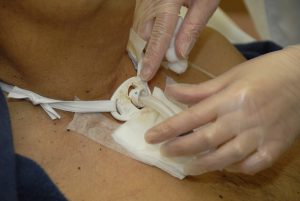 A gunshot to the neck in a 26-year-old man resulted in spinal cord injury, causing quadriplegia. The patient underwent tracheotomy and was placed on full-time mechanical ventilation. Because the gunshot cut the connection between his trachea and larynx, he could communicate only by smacking his lips and clicking his tongue.

Eight months after his initial emergency treatment, he presented to the Duke Voice Care Center, primarily for care of his tracheostomy tube. However, encouraged that the patient had regained some ability to breathe on his own, the team at the Voice Care Center believed they could significantly improve his quality of life. They conceived a multistep plan to achieve this goal.

Answer: Insertion of a T-tube, which is most often used as temporary tracheal repair in pediatric patients, was key to restoring the airflow that allowed the patient to speak.

When the patient arrived at Duke for care of his tracheostomy tube approximately 8 months after the gunshot incident, his ability to breathe through the tube without the ventilator had improved. That progress gave the voice care team hope about the potential of restoring the patient's ability to speak, which the patient and his family enthusiastically supported. Endoscopic examination found that the patient could move his vocal folds, and this evidence of innervation encouraged the team to proceed.

“We re-established the anatomical windpipe, but it was narrowed in the center due to scarring in a way that prevented any air from going around the tracheostomy tube so he could speak,” Witsell says. Twice he attempted to dilate the trachea with balloons and steroid treatment, but the tracheal scarring quickly returned and was too much for these techniques to overcome.

The voice team members met to discuss their options, and Witsell suggested a procedure generally associated with pediatric patients: “When children have tracheal problems, we do a laryngotracheal reconstruction procedure that often involves putting in a soft, plastic scaffolding called a T-tube to hold the airway open.”

But there would be no space for a tracheostomy tube, so the team was unsure whether the patient would be strong enough to breathe on his own when awake—he would have ventilation provided by continuous positive airway pressure while sleeping. Witsell achieved a “nice, normal-sized airway” by endoscopically placing the T-tube to minimize further scarring.

Within hours of the operation, the patient spoke for the first time in almost 2 years. “He was a little hoarse for 3 or 4 words,” Witsell says, “and then he was able to voice a conversation with a strong and beautiful voice. In fact, he wouldn’t stop talking!”

After several days in the hospital, the patient returned home, where he is doing well and is continuing to regain function, including limited hand movement.