Screening for high-risk conditions may present missed opportunity for treatment

But an analysis of more than 8,500 patients referred to Duke for cardiovascular catherization suggests that the prevalence may be greater than generally acknowledged and may represent a missed opportunity for identifying high-risk patients using genetic screening.

Published in August in the Journal of the American College of Cardiology, the study found that five percent of the patients referred for cardiac catherization had genetic evidence of one of these high-risk MCVDs, and two percent had genetic and clinical evidence of disease based on EHR review.

“The data tell us that monogenic diseases are not as rare we think,” says Shah, a Duke cardiologist who specializes in genetic disorders and a long-time advocate for what she describes as a “genetics forward” approach to diagnostic processes.

“Individually, the diseases may not be that common,” she adds. “But when we view them in aggregate, these conditions are, in fact, common. Health care providers should be aware that they exist among the patients we are treating and that these diseases are underdiagnosed.” In fact, she notes that approximately one in 40 patients has a monogenic condition.

One of the keys to identifying patients at high risk of monogenic disorders, Shah says, is genetic screening. “The one wonderful characteristic about these disorders is that you can identify the condition and assess the risk with a relatively simple genetic screen,” she says.

The research was conducted by analyzing whole exome sequencing from 8,574 individuals referred for cardiac catheterization. The researchers identified pathogenic or likely pathogenic variants associated with MCVD. Results indicated that 389 individuals (4.5%) were predicted to have at least one MCVD based on carrying a genetic variant for one of these diseases. EHR review was then used to predict the presence of at least one MCVD. The analysis indicated that 149 individuals (1.7% of the cohort) did have MCVDs. But only 35% had been clinically diagnosed.

“Those patients who have not been clinically diagnosed represent our missed opportunity,” says Abdulrahim. “This research is directly relevant to our need to change the way we manage patient care and, in particular, change the diagnostic journey patients go through.”

The study demonstrated that even among highly trained and experienced cardiologists, MCVDs are rarely encountered and probably significantly underdiagnosed, Shah says.

“This is not the fault of the physicians,” she adds. “But the research highlights the potential importance of a genetic forward approach and the need for a broader, more well-developed clinical infrastructure to refer patients earlier for genetic evaluation.”

The pathway to precision medicine begins with genetic testing, says Svati H. Shah, MD, MS, MHS, senior author of the study analyzing the risks of undiagnosed monogenic cardiovascular diseases. For many years, the Duke Adult Cardiovascular Genetic Clinic was the only one of its kind in the Southeastern United States.

A long-time advocate of genetic testing as a diagnostic tool, Shah says the study helps demonstrate the need for more accessible testing. “Our analysis suggests that perhaps we should begin with genetic testing,” she says. “Let’s use genetics more widely across our patient populations so we are not waiting until people develop disease. We can really figure out who is at risk much earlier.”

Unfortunately, genetic testing clinics are not yet common, she says, and wait times are long. The creation of more clinics, more genetic counselors, and more physicians with genetic training will accelerate the trend toward precision medicine, she says. 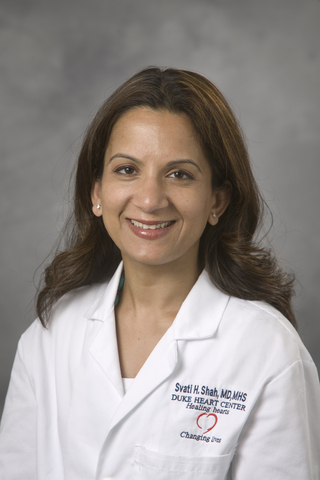