After sustaining football-related injuries in his youth and learning to live for decades with limited shoulder mobility, a man in his early 70s was encouraged by his wife to seek medical attention for the longstanding pain. Over the years, the patient had compensated significantly with his contralateral shoulder and had developed back pain from not being able to use his arm fully to propel his gait. Radiographs revealed severe arthritis on the right glenoid that included a significant number of osteophytes, making it difficult to identify the bone within his socket.

“He had been told multiple times at other facilities that there wasn’t much he could do because of the complexity of his case, so he had a lot of doubt going in when he presented at Duke,” says Oke A. Anakwenze, MD, MBA, orthopaedic surgeon and head of shoulder surgery at Duke.

After consulting with his fellow shoulder surgeons at Duke, Anakwenze decided that the best surgical option would depend on the amount of natural bone remaining in the glenoid cavity. He knew that the success of this case would be highly reliant on 3-D presurgical planning, “not just the tools or expertise we have in the OR,” he says.

QUESTION: How did Anakwenze resolve a lifetime of shoulder pain and immobility for this patient?

ANSWER: After creating a 3D-printed model and a patient-specific guide to simulate the surgery, Anakwenze performed a reverse total shoulder replacement. This procedure reverses the location of the ball and socket of the shoulder joint and enables the patient to use muscles other than the ones in the rotator cuff to move the arm.

To do this, Anakwenze first uploaded a CT scan of the patient’s scapula to a software modeling program and then 3D-printed an accurate, anatomic model to help determine whether surgery was possible virtually.

“Using the software, you can move the shoulder replacement in 3-D and find the perfect position that would work for the implant,” he says. “You can also see any abnormalities, shift components, and determine if there is anything else you should be doing.”

Even though the patient’s osteophytes made it challenging for Anakwenze to see the real shoulder on 2-D radiography, the 3D-printed scapula model helped him get a sense of the shoulder’s true condition. “We were able to identify the normal glenoid and ensure that we could get enough fixation and that the implants had enough bone for stability,” he says.

He also created a patient-specific guide designed to fit exactly onto the patient’s scapula. This guide is sterilized and snapped onto the model of the scapula and the patient’s real shoulder during surgery to provide needed landmarks for screws. “If it’s not a normal shoulder, you would never know your landmarks,” Anakwenze says.

Prior to the surgery, Anakwenze showed the patient the 3-D model and guide to help explain the presurgical plan, but the patient was still somewhat skeptical that he would be able to achieve the function he wanted. However, because of the precise presurgical planning using 3-D planning, the surgery was a success, and the patient experienced no complications. Anakwenze notes the patient is now able to play with his grandchildren and perform his activities of daily living without any shoulder pain.

The patient returned to clinic three months postoperatively and tearfully told Anakwenze that he could not believe he had lived with pain for so long without surgery, Anakwenze says. “This patient is an example of why we do what we do—to see the transformation in his life. His chronic pain and overall mental psyche had affected not just him but his entire family, but now he feels like he’s gotten his life back.”

Anakwenze models almost every shoulder surgery he does and believes that the future of orthopaedics will involve 3-D presurgical planning for surgeries of all kinds. “At Duke, we have every software available and the multidisciplinary infrastructure to resolve the most complicated patient cases,” Anakwenze says. “Using this type of software to simulate surgeries and make patient-specific guides can help prevent those minor errors from happening and reduce the chance of complication.” 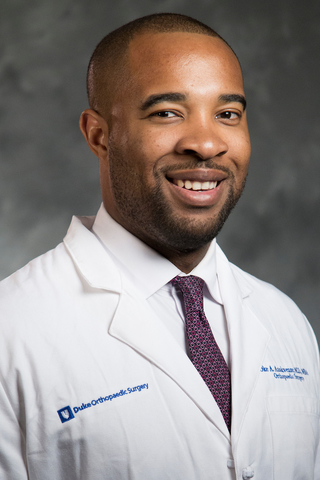