During a beach trip in June 2014, an 81-year-old man with ankylosing spondylitis fell in his boat, hit his head, and severed his fragile spinal bones at C6 and C7. His spine was so fragile because, in ankylosing spondylitis, the spine is essentially fused, like a long pole that can be easily broken into two pieces.

At a local hospital, a team relieved pressure from a hematoma compressing the spinal cord, but did not insert screws or stabilize the neck. As a result, the patient became a quadriplegic. Local surgeons operated to remove the blood clot, and, over time, the paralysis reversed and the patient was able to regain function.

The cervical spine, however, was not stabilized with hardware. Weakening scoliotic cervical vertebrae gave way to a chin-on-chest deformity in which the patient’s ear touched his shoulder and his neck became very tight and painful. He consulted several doctors, but none were willing to operate because of the high-risk nature of the procedure.

The patient and his wife then attended a public lecture on cervical spine problems by Duke neurosurgeon Michael Haglund, MD, PhD. They asked for a referral to Duke and were seen by Isaac Karikari, MD, a neurosurgeon with orthopaedic fellowship training who specializes in treating spinal deformities in adults and children. After a candid discussion about the risks, the patient agreed to undergo surgery.

Question: What procedure was performed to bring the patient’s fragile neck bones back into alignment?

Answer: The Duke neurosurgeon performed a C7 pedicle subtraction osteotomy. The C7 vertebra was cut in half and reattached in an improved alignment. 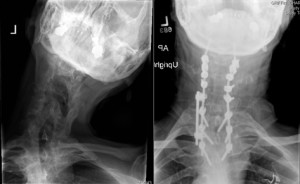 Figure 1. X-ray images of the patient’s neck before (left) and after (right) corrective surgery

The surgery took approximately 6 hours, during which the spinal cord was immobilized.

“You cannot manipulate the spinal cord, or else a patient will become paralyzed,” Dr. Karikari said. “That’s what makes the surgery so high risk.”

Karikari inserted a sequence of rods and screws around the spine for support (Figure 1). The patient received additional stabilization with a later surgery.

He also underwent percutaneous endoscopic gastrostomy for feeding and performed swallowing exercises to normalize the esophagus. Today, the patient eats and drinks normally and has returned to his previous activities, including boating and spending time with his family.

Karikari encourages physicians to refer any adolescent or adult patient with a crooked spine or scoliosis for further evaluation. Often, patients require monitoring alone and will not require surgery. “But it’s best for us to see them sooner for evaluation because waiting can make a condition too complex for surgery,” Karikari said. Of note, any patient older than 70 years is seen by a geriatric team that helps the neurosurgical team manage medications and challenging health problems.