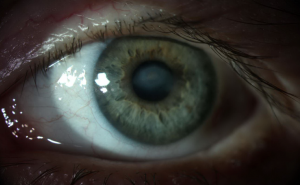 After years without any definitive treatment options, a 45-year-old woman with stage 3 neurotrophic keratopathy (Figure 1) was referred to the Duke Eye Center. She had a history of a brain tumor, which had affected the function of her trigeminal nerve, resulting in loss of sensation on the left side of her face, including her cornea.

Her corneal anesthesia had led to corneal ulceration and perforation in the past, requiring emergent surgery to save her eye. She and her ophthalmologist reached out to Duke oculofacial plastic surgeon Ilya Leyngold, MD, to see if he could offer a long-term solution for the condition.

Question: What first-of-its-kind surgery did Leyngold perform to restore sensation in the patient’s cornea? 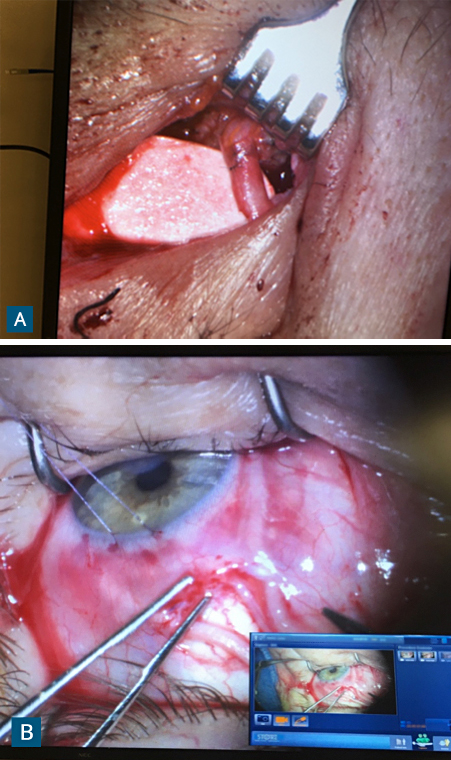 FIGURE 2. (A) Intraoperative photograph showing anastomosis between the nerve graft and deceased-donor supratrochlear nerve performed through a small eyelid incision; (B) Fascicles of the nerve graft are inset in the subconjunctival space around the corneoscleral limbus

Answer: Leyngold performed corneal neurotization using a deceased-donor nerve graft to transfer the supratrochlear nerve from the patient’s right side to the left cornea (Figure 2). Three months later, her visual acuity and corneal sensitivity had both improved dramatically.

Until recently, no cure existed for neurotrophic keratopathy, Leyngold says. Treatments were designed to protect the cornea and prevent infection, rather than targeting the loss of sensation itself. In the past few years, however, clinicians have introduced corneal neurotization, a procedure in which a healthy sensory nerve is transferred to the cornea.

In the newest iteration of the surgery—performed by only a handful of surgeons across the world—reinnervation is achieved through a small eyelid incision using autologous sural nerve grafting, which is significantly less invasive than the original technique that required a bicoronal scalp incision. Still, the surgery requires a multidisciplinary team and carries the risk of donor-site morbidity.

By using a nerve graft from a deceased donor and thereby avoiding the need to either make a large incision in the patient’s scalp or take a graft from her leg, Leyngold explains, the surgery he performed was even less invasive.

“It’s not a novel concept,” he says, “but it’s a novel approach in that—to my knowledge—no one has used a deceased-donor nerve graft for this indication. My hope is that, because this approach involves less surgery, less down time, and potentially fewer complications, we might be able to increase the number of patients we can help. Someday, maybe we can offer this procedure to people who have only partial loss of corneal sensation or other chronic ocular conditions like dry eye.”