New research out of Duke Ophthalmology is paving the way for the development of clinical trials for dry age-related macular degeneration (AMD), a common cause of central vision loss in older adults. At present, there are no FDA-approved treatments for dry AMD other than Age-Related Eye Disease Study Vitamin formulations, which can reduce the risk of progression to neovascular (wet) AMD but do not directly treat the disease.

The lack of treatment options can be attributed to two main obstacles, says Duke retinal specialist Eleonora Lad, MD, PhD. First, the pathobiology of the early stages of the disease is not well understood. Second, the paucity of established biomarkers of early disease poses a challenge to clinical trial design.

Lad’s research focuses primarily on identifying biomarkers: structural (imaging), functional, and blood-based. Her long-term goal is to understand the causes of visual impairment in patients with early-to-intermediate AMD. “We are now able to translate these impairments into visual functional biomarkers that can be used for proof-of-concept clinical trials,” she says.

One component of this biomarker discovery work has been to improve imaging technology to facilitate imaging-histopathology correlation studies in postmortem eyes with dry AMD. Postmortem eyes are ideal for studying histopathology but present challenges to traditional optical coherence tomography (OCT) imaging because of the way they are prepared.

Lad works closely with other Duke ophthalmologists and departments such as Biomedical Engineering to develop new imaging techniques. One such device—described in an article published in August 2017 in Biomedical Optics Express—is a custom OCT periscope, which allows for high quality imaging of the macula of postmortem eyes with dry AMD.

This finding is important, she says, because patient-reported outcomes are increasingly mandated by regulators, especially in Europe. The results also suggest that LLVA is a functional biomarker of early AMD—one that could easily be implemented in future clinical trials.

Lad is also leading a natural history longitudinal clinical trial—one of the largest of its kind—to compare visual function and imaging biomarkers between a cohort of patients with early-to-intermediate AMD and an age-matched control population. Baseline results of the trial were reported in May 2018 in the American Journal of Ophthalmology.

The baseline results can help investigators determine which biomarkers to use in clinical trials to differentiate between early-to-intermediate stages of AMD and normal eyes. These visual function biomarkers can also be correlated with imaging biomarkers and blood-based biomarkers to better understand the underlying pathology of the disease.

In the future, the one- and two-year outcomes of the trial will help identify the metrics that are most relevant to disease progression. Ultimately, Lad hopes these studies will facilitate the development of treatments that can prevent disease progression and central vision loss.

“Previous trials have all been applied to the late stages of AMD, specifically geographic atrophy,” she says. “But, by that point, it’s likely too late to intervene because the retinal neuronal connections have already been lost, so it is very difficult to restore function, unless regenerative medicine approaches are used. If you act at earlier stages of the disease, the patients would be much more likely to fare better in terms of visual acuity outcomes.” 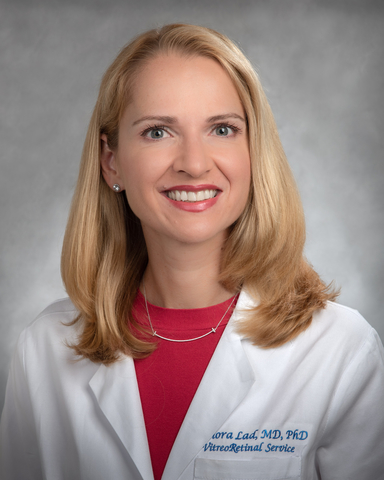