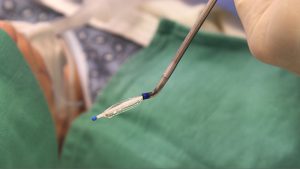 In late 2016, Duke began using the first balloon dilation intervention approved by the US Food and Drug Administration for Eustachian tube dysfunction (ETD). Now beginning its second year in use at Duke, the treatment continues to show promise for improving Eustachian tube function and significantly reducing the need for ear tubes and related surgeries.

The AERA® Eustachian Tube Balloon Dilation System (Acclarent, Inc., Irvine, California) consists of a catheter that is threaded through the nose into the opening of the Eustachian tube and a small balloon that is inflated to dilate the tube. Once the tube is open, the balloon is deflated and removed. The device also adapts to Eustachian tube anatomy through precise access and positioning so that trauma is minimized during the procedure. Many patients report immediate relief following the 10-minute, minimally invasive procedure.

The system has been shown to improve ventilation of the middle ear and greatly eliminate middle ear pressure in properly selected patients. Duke otolaryngologist Calhoun D. Cunningham III, MD, has performed approximately 50 Eustachian tuboplasty procedures with the AERA system and says there are 3 main categories of patients who benefit most from the treatment:

By potentially eliminating the need for PE tubes, the treatment also reduces the risk of tube-associated tympanic membrane perforations and the inconvenience of having to wear earplugs when participating in water activities.

“In about 60% to 70% of patients, we see significant improvement in middle ear fluid, and patients who were previously unable to equalize the pressure in their ear are now able to do so,” Cunningham reports. “The procedure also helps us pinpoint the cause of their ETD more precisely and examine other conditions that may be contributing to it, such as allergies, sinus problems, reflux, or enlarged adenoids.”

Eustachian tuboplasty is expected to be a significant advance for bringing lasting relief to the millions of people who require ear tube surgery because of ETD, fluid in their ears, or chronic ear infections. “We are still evaluating the long-term efficacy of the procedure, but the effect seems to be maintained in many of these patients,” says Cunningham.

Otolaryngology
The typical findings shown here are seen in what type of middle ear tumor?
Diagnose This