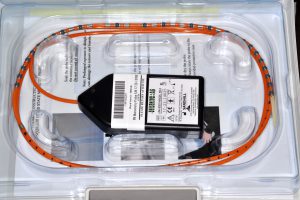 A 68-year-old woman with a history of gastrointestinal evaluations and upper endoscopies—she had undergone esophageal dilation 10 to 15 years earlier—presented to Duke gastroenterologist Richard Wood, MD, with difficulty swallowing and esophageal dysphagia at her suprasternal notch. She had previously been diagnosed with gastroesophageal reflux disease and prescribed a proton pump inhibitor, but her symptoms persisted.

Because the patient had undergone heart valve surgery just months earlier and had recently been hospitalized for a wound infection, Wood opted to start with a barium swallow—a more conservative diagnostic approach than upper endoscopy. The barium swallow revealed a large, 7-cm hiatal hernia and suggested either a stricture at the end of the esophagus or a functional disorder at the lower esophageal sphincter.

To evaluate the function of the esophagus, Wood performed an esophageal manometry test, which confirmed the hiatal hernia and identified an esophagogastric junction outflow obstruction, combined with some features of esophageal hypercontractility. However, it was still unclear what was causing the disordered esophageal motility and whether the patient would benefit from repeat esophageal stretching.


Answer: Functional lumen imaging probe topology, which uses high-resolution impedance planimetry to evaluate esophageal distensibility, helped Wood determine that, rather than having a stricture, the patient had a true disorder of relaxation of the lower esophageal sphincter and would benefit from an alternative treatment instead of esophageal stretching.

“It’s somewhat of a subtle difference,” he notes, “but using the imaging probe during an upper endoscopy provides complementary information to esophageal manometry and definitive, real-time information we can act upon. In this case, it helped us determine whether she had a true stricture, which would require esophageal stretching as had been done in the past, or a compliance issue at the lower esophageal sphincter, which would require a different kind of treatment.”

When findings on endoscopy in combination with the functional lumen imaging probe device revealed that the patient’s lower esophageal sphincter had a very low distensibility index, Wood injected botulinum toxin into the valve of the lower esophagus during the same procedure to help the muscles relax.

He cautions that botulinum toxin is a temporary solution in some patients, and other surgical options are also available. But, in terms of trying to treat this patient in the least invasive way possible, Wood says it was a good option.

“The treatment not only offered the potential for relief to the patient, but it also gave us more diagnostic information because a response to the treatment would help confirm that she had an abnormality in how that muscle was relaxing.”

Wood reports that, 8 months after the procedure, the patient is doing well and has had no difficulty swallowing.