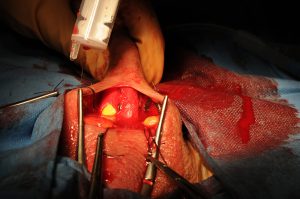 A 61-year-old man with vascular disease, hypertension, and a long smoking history developed erectile dysfunction that failed therapy with traditional oral medications as well as intracavernosal injections. After consulting with a urologist, he elected to undergo penile implant surgery.

The patient consulted a second urologist, who observed a cylinder crossover and extensive corporal fibrosis. The pump device was also affixed to the right testicle, causing him extreme pain. Upon the recommendation of a device company representative, the urologist advised the patient to see Duke urologist Aaron Lentz, MD, who specializes in reconstructive urologic surgery and performs more than 100 penile implantation surgeries per year.

Question: How did Lentz correct the cylinder crossover and treat the patient’s erectile dysfunction?

Answer: With plans to perform a third revision surgery, Lentz first prescribed varenicline to help the patient quit smoking to reduce the risk of surgical complications. He then performed explantation of the previous implant through the infrapubic incision, followed by implantation, using backward-cutting scissors and cavernotomes (Uramix, Lansdowne, VA) to shave the fibrotic tissue from the corporal bodies to create space for new cylinders.

Overall, penile implant surgery is highly successful with low rates of infection, making implants an appropriate option for men who have not had success with oral medications, Lentz says. But, he cautions, many urologists perform only a handful of penile implant surgeries a year, whereas it’s important to have a dedicated expert perform the surgery.

“There are a significant number of nuances that are really important to achieving a good outcome with this procedure,” Lentz explains. “If someone doesn’t do it regularly—more than just once every few months—they may forget the subtleties that help predict a successful outcome.”

He adds that his experience performing the surgery has led him to develop a full toolbox of techniques. For example, he used a penoscrotal approach, making a counter incision on the distal penile shaft to help implant the device, because of the extensive fibrosis and the cylinder crossover and because the previous 2 surgeries had been performed through an infrapubic incision. The revision surgery also required him to use advanced techniques and perform delicate dissection to detach the pump without compromising the patient’s right testicle.

Following the surgery, the patient reported that his pain had disappeared and that he was able to use his new device. He had also dramatically reduced his smoking habits.

“It’s amazing to see how, when patients get these implants, they’re happier and their outlook on life is better,” remarks Lentz. “This patient really illustrates what we do at the Duke Urology Men’s Health Clinic—it wasn’t just about replacing the implant. It was also about encouraging a lifestyle change that promotes his long-term health.”