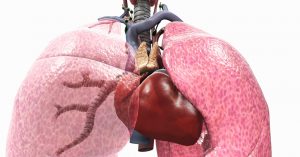 A 64-year-old woman who used vasodilators to manage pulmonary arterial hypertension for more than 10 years presented with near syncope when the condition became refractory to therapy. She was evaluated for lung transplant.

Because her pulmonary arteries had become extremely enlarged and were taking up most of her left chest cavity, safely transplanting new lungs would require a rare technique in which part of a deceased donor heart would be needed to replace the patient's right ventricular outflow track (RVOT). Part of the deceased donor's cardiac muscle would then be reattached to the patient's heart.

The patient faced many challenges as a candidate for transplant. In addition to having a cardiac index of 1.5, she had high levels of antibodies, limiting her potential donor pool. A stage 1 cancer tumor was also found on 1 of her kidneys during assessment.

Question: Given the patient's comorbidities, how was her health care team able to move forward with a transplant?

Answer: The surgeons at the Duke Lung Transplant Clinic successfully performed a bilateral transplant and RVOT following a 10-month wait for an appropriate donor. Prior to the procedure, partial nephrectomy was performed to remove the cancerous tumor. Physicians determined the cancer was not a threat to her recovery.

The team was conservative in its assessment—particularly regarding the discovery of cancer—but, after several months of evaluation, they approved the transplant. The knowledge that the patient had a strong family support network to help with her recovery also influenced the Duke team's decision to move forward.

"Our team faced many questions in this case, but the overall concern at the outset was whether she was simply too sick for transplantation," says Alice L. Gray, MD, a Duke pulmonologist who worked on her case.

The presence of cancer in a transplant candidate typically requires a 2-year wait following resection. However, the team determined that the type and location of the patient's cancer did not present a threat of recurrence when immunosuppressant drugs were introduced.

"We learned that not all cancers are the same," Gray remembers. "Because this resection resulted in a high likelihood of cure, we determined the tumor would not compromise her outcome. It was a key juncture in the decision process."

Another factor contributing to the complexity of the case was the patient's high levels of antibodies, which put her at risk of hyperacutely rejecting approximately 89% of the available deceased donor organs. This meant that she had to wait 10 months for a suitable donor organ rather than the average 14-day wait time for a lung transplant recipient.

However, the patient did have 1 encouraging condition. During pretransplant physical therapy, her oxygen requirement remained relatively stable at 5 to 7 L/minute at rest and about 8 L/minute during activity. Following the procedure, the patient required extracorporeal membrane oxygenation for 5 days, underwent tracheotomy, and received mechanical ventilation. The patient experienced early graft dysfunction and underwent aggressive plasmapheresis to manage the condition.

"Compared to a relatively normal, straightforward transplantation, she had a more complicated course," Gray recalls. After the patient's condition was stabilized following the procedure, her improvement accelerated. She left the hospital 3 weeks after surgery and recovered quickly.

Gray says that the patient's family support network helped in her prompt recovery. "Her recovery proceeded super smoothly considering all we were dealing with," Gray remembers. "It could have been far more complicated."

The patient has returned to an active lifestyle and has traveled internationally since the transplant.