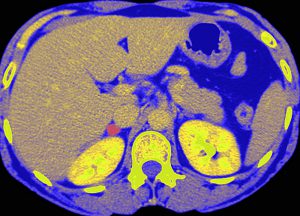 Primary aldosteronism remains an underdiagnosed condition that significantly increases a person's risks for cardiovascular morbidity, dementia, and renal failure, say Duke endocrinologists. They encourage a sharper focus on the condition.

Primary aldosteronism is the most common cause of secondary HTN (5%-13% of cases) and often presents in individuals with resistant or difficult-to-control HTN.

“Primary aldosteronism has been missed too many times,” says David D. D'Alessio, MD, director of Duke’s Division of Endocrinology, Metabolism, and Nutrition and associate director of the Duke Molecular Physiology Institute. “The impact of elevated blood pressure (BP) is huge in terms of patient health, suffering, and financial cost,” he says.

“Truthfully, we don’t see a lot of older patients with aldosteronism, simply because they don’t get old,” remarks D'Alessio.

For patients taking multiple anti-HTN medications and, in particular, in those with hypokalemia, guidelines from the Endocrine Society recommend screening for primary aldosteronism by determining the serum aldosterone-renin ratio. Commonly used confirmatory processes—often beginning with the 24-hour urine collection test—can later be conducted to confirm or exclude the condition.

The 2016 guidelines set forth by the Endocrine Society recommend testing for primary aldosteronism in patients with sustained BP above 150/100 mm Hg on each of 3 measurements obtained on different days or HTN (BP > 140/90 mm Hg) resistant to at least 3 conventional anti-HTN drugs (including a diuretic).

“The challenging aspect for the referring physician is to tease out the cause of the hypertension,” says Elizabeth A. Campbell, MD, a Duke endocrinologist who collaborated with D'Alessio to create a continuing medical education video presentation to promote better understanding of primary aldosteronism and its consequences.

“Certainly a small percentage of patients may have a secondary cause such as Cushing disease, but specialists need to be more aware that primary aldosteronism could be the cause of HTN,” she says.

Generally, surgery is recommended in patients with unilateral primary aldosteronism. Because it is more cost effective than lifelong medical therapy, surgery results in a cure for HTN in 35% to 60% of patients. In particular, younger patients with the condition may experience years of health benefits following surgery. Nonsurgical therapies require a mineralocorticoid receptor blockade.

When adrenal surgery is feasible and desired, endocrinologists recommend that an experienced radiologist use adrenal venous sampling to distinguish between unilateral and bilateral adrenal disease.