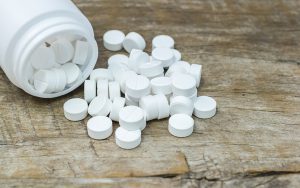 Patients with acetaminophen toxicity presenting to Duke emergency departments (EDs) in 2017 are triggering nephrology consultations with requests for dialysis.

But performing dialysis in patients with acetaminophen overdose may present unnecessary risks, says Dinushika Mohottige, MD, MPH, a Duke nephrology fellow who has been summoned as a nephrologist consult on several emergency toxicity cases. The effectiveness of dialysis for all cases of acetaminophen toxicity is unclear, she says.

The widespread availability and use of acetylcysteine, an effective and commonly used antidote, raises further questions regarding the need for dialysis in overdose cases.

Acetaminophen toxicity is the leading drug-related cause of liver failure in both the United States and United Kingdom.

The nephrology referrals and dialysis requests are based on 2014 guidelines developed by the Extracorporeal Treatments in Poisoning (EXTRIP) work group, whose recommendations are followed closely by ED physicians. EXTRIP is composed of international experts representing diverse specialties and professional societies with a focus on toxicology and emergency organizations.

But the recommendation for dialysis to be initiated for all of these patients may not be clinically sound, says Mohottige.

She has expressed concerns to Duke nephrologists that the guidance about dialysis in all cases of acetaminophen appears to be based on outdated studies with small numbers of patients. The EXTRIP guidance also includes studies in which unsubstantiated methods of treatment such as liver dialysis are also included, raising concerns about the quality of the evidence for recommending dialysis.

“We do not always have a sound, evidence-based protocol for performing dialysis in these patients,” Mohottige says. “We need to approach each of these situations as individual cases and examine carefully the exact indications for dialysis in each of them.”

Traditional indications for dialysis—acidemia, uremia, or hyperkalemia—do not always present in patients with acetaminophen toxicity who present to the ED, she says. Additionally, dialysis removes antibodies as well as toxins. “The latter point raises the greatest concerns because the antidote acetylcysteine is removed along with the acetaminophen,” Mohottige adds.

The risks of dialysis—infection, bleeding, catheter failure, fatal arrhythmia, stroke, and cardiac event—require that careful assessments be performed for each patient, she says.

“The question to the nephrology community is: 'What lens should we use to view these cases?'” Mohottige says. “Perhaps we should be developing another approach supported by well-substantiated clinical evidence and an individual examination of each of these cases.”