Three different therapies have helped a 74-year-old patient with non–small-cell lung cancer (NSCLC) survive his initial diagnosis and 2 reoccurrences during 13 years in the care of a team of Duke specialists.

At the suggestion of a family member, the retired carpenter sought treatment at Duke for chronic obstructive pulmonary disease, hemoptysis, and worsening respiratory discomfort. Duke oncologists made the first NSCLC diagnosis.

Question: What customized treatment strategies were used to treat the cancer diagnoses?


Answer: A team of oncologists, radiation oncologists, a thoracic surgeon, and an interventional pulmonologist collaborated to develop a therapeutic plan, including chemotherapy and radiotherapy, surgical resection, bronchoscopy airway treatment with brachytherapy, and photodynamic therapy. The patient, who is now cancer free, also participated in a research trial.

“This has been a remarkable journey for a lung cancer patient spanning 13 years,” says Momen W. Wahidi, MD, interventional pulmonologist and lung specialist. “The whole team worked together to make sure he received the most effective treatment at each stage of the disease process, with his well-being and quality of life at the center of his care.” 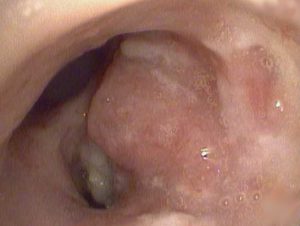 FIGURE 1. Image of the bronchial tumor prior to intervention

Following the initial diagnosis in 2003, the patient underwent radiotherapy and chemotherapy, but the cancer recurred in his right main stem bronchus shortly after treatment. Wahidi bronchoscopically delivered localized brachytherapy to eliminate the tumor.

A second tumor was diagnosed in 2007 in the patient’s right lung. After an assessment by a multidisciplinary lung cancer team, it was decided that resection would be most effective. Thomas A. D’Amico, MD, chief of Duke’s General Thoracic Surgery Section, successfully resected the tumor, eliminating the cancer.

In February 2016, the patient presented again with hemoptysis. Following the diagnosis of a new tumor in the patient’s airway, Wahidi and others determined that the tumor’s location prevented resection (Figure 1). When it was evident the tumor was localized to the airways and had not spread, the patient was enrolled in a multicenter trial in which paclitaxel was injected into the airway tumor.

The treatment reduced the size of the lesion but did not eliminate the malignant tissue. Wahidi opted to use photodynamic therapy, a procedure used in major medical centers that makes the tumor cells sensitive to light and then exposes them to intense light to cause apoptosis. 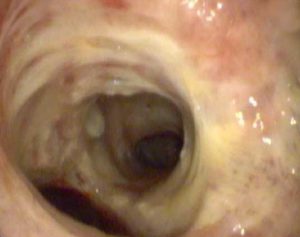 The patient first received porfimer sodium, a photosensitizing agent, in the bloodstream. The medication is absorbed by cells throughout the body but remains in cancer cells longer. Two days after injection, bronchoscopy was performed and a specific wavelength laser light was locally applied to the tumor (Figure 2). This light energy in the presence of oxygen leads to an intense toxic reaction in the photosensitized tumor cells.

“This patient has had a favorable outcome with his recent round of treatment and has a good prognosis,” Wahidi says. “While not every lung cancer patient will experience similar positive results or live this long, his success offers hope and speaks for the role of multidisciplinary, patient-centered care delivered by a team of expert clinicians who have access to advanced treatment.”