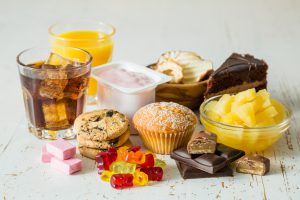 A study published September 26, 2016, in the Journal of Clinical Investigation challenges the beliefs of some investigators about how the body becomes resistant to insulin. The results of this study conducted in mice and corroborated in human liver samples illustrate that high-fructose feeding activates hepatic carbohydrate-responsive element-binding protein and induces metabolic disease.

“Some investigators contend that commonly consumed amounts of sugar do not contribute to this epidemic of diabetes, while others are convinced that excessive sugar ingestion is a major cause,” says senior author and Duke endocrinologist Mark Herman, MD. “This paper reveals a specific mechanism by which consuming fructose in large amounts, such as soda, can cause problems.”

A recent addition to Duke, Herman led the research during the past 4 years at Beth Israel Deaconess Medical Center at Harvard University in Boston with collaborators from the University of Massachusetts Medical School and Pfizer.

The new findings suggest the likely cause of insulin resistance may not be the buildup of fat in the liver, as commonly believed; rather, they suggest that insulin resistance is caused by processes activated by carbohydrate-responsive element-binding protein, which may then contribute to the development of hepatic steatosis and increased glucose production.

In other words, what might look like insulin resistance is actually the result of a distinct process that stimulates glucose production independently of insulin.

Fructose may not be the only nutrient that stimulates carbohydrate-responsive element-binding protein to start this process—the protein may also be activated in other ways. However, the investigators believe this study provides a better understanding of a key mechanism that may contribute to prediabetes, which could lead to earlier diagnoses and new opportunities to intervene.