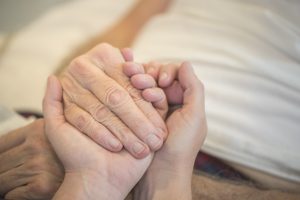 The arrival of David Casarett, MD, as chief of palliative care services for general internal medicine at Duke Health in the fall of 2016 marked another key evolutionary step for one of the oldest and largest palliative care programs in the Carolinas.

A nationally known leader and innovator, Casarett plans to build a population-based approach to expand the program regionally by creating strong community partnerships.

It’s another step in a history of innovation for the palliative care service, which began at Duke as a small branch of geriatrics in the late 1980s. Early inpatient palliative service focused chiefly on managing end-of-life care at skilled nursing facilities in the Durham, NC, community.

“The doctors I knew were always telling me I needed to see one of their patients in this wing or that floor,” Galanos remembers. “I wound up following patients everywhere, literally all over the hospital. It was incredibly demanding.”

Galanos’ efforts to build the fledgling program coincided with a growing awareness of palliative care as pain and symptom management anchored by patient and family communication regarding care goals.

“People were still thinking of palliative care as hospice in those days,” Galanos explains. “But hospice and palliative care are distinct entities. Palliative care is much more upstream. It’s more focused on patient and family choices, a plan of care, and a care objective.”

Galanos’ efforts were recognized and supported by Harry Jay Cohen, MD, director of the Duke Center for the Study of Aging & Human Development, and an early advocate for palliative care expansion.

By the early 2000s, the program had morphed into Duke Palliative Care Consult Service, a more defined initiative that included nursing and chaplaincy support. The contributions of professionals such as Jennifer Gentry, NP, helped fuel the growth. Gentry made 50 presentations to nursing groups in the community and at Duke Hospital to highlight the distinctions between hospice and palliative care.

“At that point we were doing 140 consults annually,” Galanos remembers. “We were still very busy. The success of the program kept it growing.”

Current metrics capture the growth curve. Palliative care had nearly 1,900 total consultations during 2015; of those, 1,200 were for general adult care, 600 were for adult oncology, and approximately 100 were for pediatrics.

“We have a very diverse service,” says William D. English, MBA, MSHA, administrative manager. “Our goal is to figure out what the family wants and to bring everyone together with the least amount of interfamily trauma.”

Casarett, who came to Duke from the University of Pennsylvania where he directed hospice and palliative care and served as a faculty member for medical ethics and health policy, says the next growth phase will require the “invention” of population-based palliative care.

“Duke has a unique opportunity to invent the field of population-based palliative care and become the national leader in improving end-of-life care for populations,” Casarett says.