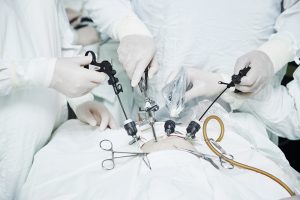 An article published by Duke investigators in the March 2016 edition of Obstetrics & Gynecology is the first report of a modified open laparoscopy technique using a 5-mm laparoscope. The new approach maintains the advantages of the standard 10-mm open technique while also minimizing incision size.

Used for a wide variety of procedures ranging from tubal ligation to cancer staging, laparoscopy is one of the most common procedures performed in the United States. Because laparoscopy is a safe procedure with few complications, the technique has changed little since 1971, when open laparoscopy was first introduced as an alternative to closed laparoscopy.

However, laparoscopic entry has estimated risks of injury to major blood vessels of 0.03% to 0.10% and to the abdominal viscera of 0.08% to 0.14%. In addition, the open technique has traditionally used a 10-mm laparoscope to optimize visualization, which requires a relatively large incision as well as fascial sutures. Using the 10-mm technique, it is not always possible to create the airtight seal required for insufflation of the patient’s abdomen.

William Hurd, MD, coauthor on the report and director of Duke’s Division of Reproductive Endocrinology and Fertility, explains, “In the past, most laparoscopic procedures were done with a 10-mm laparoscope because the 5-mm laparoscope did not offer the same clear view.”

Hurd says that is no longer the case. “Modern laparoscopes and cameras have excellent optical properties that make it possible to use the 5-mm laparoscope for the full range of laparoscopic operations, including diagnostic and operative procedures.”

The modified open laparoscopic entry technique uses a 5-mm laparoscope and encompasses the advantages of the standard 10-mm open technique by avoiding the blind insertion of sharp instruments, which can cause major complications, while using a smaller incision that does not require fascial sutures.

With the exception of patients with previous midline lower abdominal incisions, who are at increased risk of having intra-abdominal adhesions immediately beneath their previous incisions, Hurd says that the technique can be used for most women.

“In our experience, the 5-mm technique results in a smaller scar below the umbilicus and usually less postoperative discomfort,” he explains. “Although no entry technique can completely avoid complications, we have been using this method for more than a decade with excellent results.”

With the introduction of improved laparoscopes, Hurd says that techniques should be developed to pass on the advantages of smaller-sized laparoscopes to patients. The 5-mm open technique is part of the evolution of new-entry techniques that help to minimize a patient's risk of injury and her amount of postoperative pain.