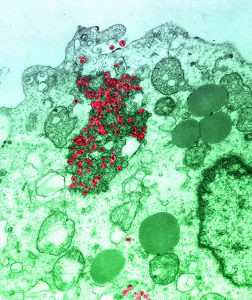 As a clinical social worker specializing in AIDS care since 1992, Gordon Lipscomb, MSW, LCSW, frequently sees patients soon after they learn that they are infected with human immunodeficiency virus (HIV).

It never gets any easier, and, in fact, it has gotten less so over the years, he says, because these cases often follow the same discernible patterns.

“One of the most frustrating things for me has been when you look at the medical history of new patients with HIV—there are so many points of intervention that could have happened,” Lipscomb says. “Could the right thing have been said on this trip to the emergency department or that trip to the primary care doctor?”

Now when health care professionals encounter patients exhibiting red-flag HIV risk factors, they have a new treatment option, one proven to help such patients avoid contracting the still-incurable infection. It is called pre-exposure prophylaxis (PrEP) and consists of 2 antiretroviral drugs, tenofovir and emtricitabine, taken in a single daily pill. Large clinical trials have shown that patients fully adherent to taking tenofovir/emtricitabine as directed demonstrate a defensive protection against HIV infection that exceeds 90%.

Approved for PrEP since 2012, tenofovir/emtricitabine did not gain popularity among primary care physicians until the US Centers for Disease Control and Prevention published comprehensive treatment guidelines in 2014.

So far, however, that popularity has mostly been confined to large metropolitan areas such as New York City, San Francisco, and Chicago, according to Mehri McKellar, MD, assistant professor of infectious diseases at Duke University. “The Southeast in particular is a bit behind in terms of uptake of PrEP prescriptions,” she says.

“Possibly this is due to concerns that it will undermine the use of condoms, result in transmission of other sexually transmitted infections (STIs), or cause adverse effects. But, for whatever reason, there remains a general lack of awareness and hesitance on the part of providers.”

She points to a survey of Duke Health primary care physicians that found that, although 78% treat men who have sex with men (MSM)—a subpopulation at high risk of becoming infected with HIV—only 17% had prescribed PrEP.

This number is particularly troubling in light of the fact that Durham County in North Carolina, home to Duke’s campus, ranks fourth in the state for HIV prevalence and third for incidence of HIV infection, McKellar adds.

Moreover, as a region, the southern states lead the nation in numbers of AIDS-related deaths, new AIDS diagnoses, and people living with AIDS. “There is very much a geographic epidemic going on, focused on this part of the country,” she notes.

Treatment adherence is extremely important. The protective effectiveness of tenofovir/emtricitabine precipitously drops if adherence to the daily dosage schedule even slightly falters. In addition, patients must make frequent office visits: every 3 months during the course of treatment.

“But it’s also important to remember you might not need this drug forever,” notes McKellar. “I’m a big believer in the idea that patients no longer at risk don’t have to keep taking tenofovir/emtricitabine.”

A major concern associated with PrEP is whether it might encourage riskier behavior among patients already at higher risk of HIV infection. For example, MSM might use condoms with less frequency. Although McKellar acknowledges that this is a legitimate concern, she points out that risk indices measured among patients enrolled in the PrEP trials remained unchanged.

Some studies found increases in non–HIV-related STIs among patients taking PrEP. However, whether the treatment itself was causative or whether an unrelated uptick in syphilis and gonorrhea in some geographic areas was to blame is unclear.

In general, the medical community has greeted PrEP as a breakthrough therapy for a serious infection that has not been granted a fresh clinical strategy for some time. Many have also noted the added benefit of a higher quality of life among some patients.

“I’ve seen couples where, even though the positive partner has an undetectable viral load and condom use is part of their routine, offering them PrEP is just extremely liberating and freeing,” says Lipscomb. “More than anything has so far, this helps separate sex from death. It finally lets people exhale and enjoy their sex lives again.”