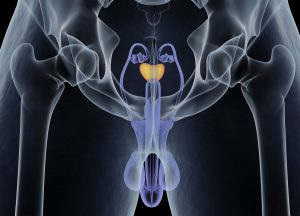 While searching for a noninvasive way to characterize circulating tumor cells (CTCs) in men with metastatic castration-resistant prostate cancer (mCRPC), researchers at the Duke Cancer Institute (DCI) have established a molecular taxonomy of genomic alterations associated with resistance to abiraterone and enzalutamide, 2 commonly used hormone therapies.

In a study published online September 6, 2016, in Clinical Cancer Research, the Duke-led team reported that multiple key genetic alterations had been isolated in the circulating prostate tumor cells of men with mCRPC and primary or acquired resistance to at least 1 of the 2 drugs. The results provide new therapeutic targets for men with hormone therapy–resistant prostate cancer and could guide future treatment selection.

“We have developed a method that allows us to examine whole genomic copy number alterations of these rare CTCs in the blood, which is unique in each patient, and which can change over time during treatment,” says senior author Andrew Armstrong, MD, medical oncologist and codirector of genitourinary clinical-translational research at the DCI.

“Whereas just 15 years ago it was a massive achievement to sequence the first human genome at a cost of millions of dollars and years of time and effort, we are now able to do that routinely within weeks of a simple blood draw,” he adds. “Our goal is to develop a liquid biopsy that would be noninvasive, yet provide information that could guide personalized clinical decision making.”

Armstrong and colleagues from the DCI and the Duke Molecular Physiology Institute used array-based comparative genomic hybridization to perform whole-genome copy number analysis on the CTCs of 16 men with mCRPC.

Focusing both on genes previously implicated in tumor progression and other genes important to cancer biology, the researchers found genetic alterations that appear to be shared among the men’s CTCs, including common amplifications of the androgen receptor as well as common alterations in SPOP, ERG, MYCN, and BRD4, DNA repair and epigenetic regulators, cell-cycle proteins, and androgen pathway genes.

“Our research provides evidence supporting the ability to measure gains and losses of large-scale sections of the CTCs’ genome in men with prostate cancer,” says coauthor Simon Gregory, PhD, director of the Section of Genomics and Epigenetics in the Duke Molecular Physiology Institute. “We are now evaluating this method combined with higher-resolution DNA mutational studies and measurements of RNA splice variants in CTCs to determine their clinical relevance to patients and treatment resistance.”

Should these common alterations be similarly identified in larger studies, they could be used as biomarkers as part of a blood-based liquid biopsy to help determine what treatments would be most effective. The findings could also point to new targets for drug development.

One such large, prospective clinical validation study is underway now at the DCI (NCT02269982). The multisite study, led by Armstrong, is examining how these mutations develop in the context of enzalutamide and abiraterone therapy and how these mutations relate to other key genetic events.