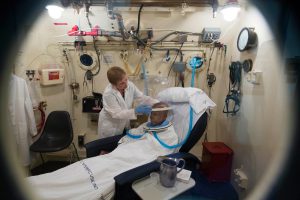 The Duke Center for Hyperbaric Medicine and Environmental Physiology, which will be entering its 50th year of operation in 2018, is a first-line referral center for hyperbaric medicine in the southeastern United States.

The largest hyperbaric medicine center along the Mid Atlantic—leading the region in the treatment of emergency carbon monoxide cases—maintains 3 pressure chambers for treatment and 4 others for research.

In addition to a full schedule of hyperbaric oxygen therapy, typically for problem wounds, the center includes a highly trained team of nurses and hyperbaric specialists who respond to emergencies, including scuba diving accidents and carbon monoxide poisoning.

Nurses have received specialized training to enter pressurized chambers or “dive with the patients,” as the center staff refers to care within the chambers. Clinical staff entering pressurized environments must adhere to strict time limits to avoid decompression sickness.

During the past 3 years, the center averaged 2,500 treatments for 170 patients, including more than 225 emergency treatments. During a particularly challenging 72-hour period in 2016—not uncommon for this center—the team responded to emergencies involving 9 individuals in addition to the center’s normal hyperbaric therapy schedule.

Recently, after a full Friday schedule—including an emergency consult for a patient with vascular insufficiency following amputation that would require weekend hyperbaric sessions—a scuba diver was transported to the center with significant neurologic deficits following a series of dives. After completing treatment according to US Navy Table 6, the diver was admitted due to persistent neurologic deficits.

At 6 AM on a Saturday after 24 hours of continuous treatment and just as the team was summoning additional trained nurses who could “dive” with patients, the center's medical team learned about another emergency.

A group of 6 workers had fallen ill as a result of carbon monoxide poisoning while cooking in an enclosed garage during heavy rain. Their symptoms ranged from mild headache to unconsciousness and angina. Peak blood levels of carboxyhemoglobin ranged from 16% to 60% (near-lethal). The patients arrived by ambulance for evaluation and treatment.

“Prompt treatment was necessary to remove the toxic carbon monoxide and minimize the chances of late neurologic sequelae,” Stolp recalls. By linking 3 clinical chambers, the Duke facility accommodated the patients, and all were discharged several hours later without symptoms or deficits.

While the workers were being discharged, a third emergency presented from a neurointensive care unit when an unconscious patient rescued from a burning home required hyperbaric treatment. “Fortunately, the nurses who had worked 24 hours earlier were now clear to return to the chamber,” Stolp remembers.

“But it took around-the-clock efforts of multiple dedicated staff—including chamber operators, 10 nurses, physicians, and multiple transporters—to coordinate 72 hours of care,” he remembers. “It was busy and unusual, but the weekend demonstrated the extent of our capabilities.”

The center's faculty includes 5 physicians board certified in hyperbaric medicine, with more than 120 years of combined experience, specializing in the physiology of human exposure to extreme environments.