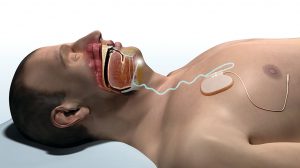 Although moderate to severe sleep apnea is typically initially managed with continuous positive airway pressure (CPAP) therapy, many patients cannot tolerate the treatment. Now, such patients have a new option: hypoglossal nerve stimulation (HGNS), an approach that harnesses the patient’s own motor neuron system to control the muscle tone of the upper airway. Duke Raleigh Hospital is the only location in North Carolina to offer the procedure, performing its first in August 2017.

An estimated 50% of patients with a CPAP prescription don’t use the machine long term, says Matthew Ellison, MD, a Duke otolaryngologist who performs HGNS. “Sometimes people get skin reactions from the CPAP mask, or they have issues with claustrophobia,” he explains. “For others, CPAP simply doesn’t eliminate apneic events. What that means is that there’s a large population of patients with untreated sleep apnea who could benefit from HGNS.”

HGNS has advantages over traditional surgical options as well, he adds. Whereas other surgical treatments rely on removing or translocating tissue, which can soften or relax over time, the new system offers a more long-term solution.

HGNS technology comprises 3 parts: (1) a nerve stimulator implanted around the distal branches of the hypoglossal nerve to control tongue movement and tone, (2) a small, programmable pulse generator, and (3) a respiratory intercostal muscle pressure sensor. It reduces airway obstruction by moving the tongue forward and tensing the tongue muscle itself when the patient is breathing in, cycling on and off throughout the night. The system, which is programmable, is operated by remote control, allowing the patient to initiate, pause, or stop the program.

The system is implanted in a relatively straightforward outpatient procedure before being activated 1 month later. Two months after the initial surgery, patients visit the Duke Sleep Disorders Center to have the machine’s voltage adjusted.

Having seen the new technology’s potential, Ellison encourages any adult patient with moderate to severe sleep apnea who has tried CPAP without success within the past 2 years to schedule a consultation to discuss HGNS.

“The clinical trials have been very encouraging, and the system is getting better and better the more we refine the technical aspects of implanting the device and fine tune the activation process of the system,” he remarks. “It’s allowed us to achieve a whole new level of success compared with previous treatments—it really is a totally different approach to treating sleep apnea.”