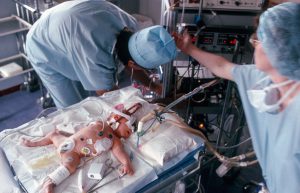 Duke University Hospital has received a platinum-level award for Excellence in Life Support for its Extracorporeal Membrane Oxygenation (ECMO) program by the Extracorporeal Life Support Organization (ELSO). Duke is 1 of only 5 programs worldwide to be recognized with the platinum-level Center of Excellence distinction, the highest level of excellence awarded by ELSO. The program is 1 of only a few in the country to support neonates through adults and across all specialties.

Used as a last resort, ECMO provides cardiac and respiratory support to patients whose heart and/or lungs are unable to sustain life. Although its use has now been expanded to include patients of all ages, the origin of ECMO was to support infants and children with respiratory illnesses, such as neonates with meconium aspiration. In some cases, it can be used as a bridge to a heart and/or lung transplant.

“Many patients placed on ECMO have an approximately 80% risk of dying. Depending on the diagnosis, the prognosis can flip to nearly 80% survival,” says Ira M. Cheifetz, MD, a pediatric critical care medicine specialist and director of the ECMO program. “Survival in neonates with lung disease approaches 90%, while recent reports in pediatric and adult patients with lung disease have shown a survival rate of approximately 75%.”

“This is a major lifesaving technology,” says pediatric cardiologist Jennifer S. Li, MD. “But it’s a resource-intensive therapy. The key is that the patient must have a reversible or transplantable condition.”

Duke has also revolutionized ECMO to include “ambulatory” and “mobile” applications.

“Until the past 5 years or so, ECMO was a surgical procedure in which the patient was sedated in bed, recovering for weeks,” explains Cheifetz. “With ambulatory ECMO, a child is awake, off the ventilator, receiving physical therapy to exercise their muscles, and even walking around the hospital. This novel approach has dramatically improved survival rates as it enables patients to maintain muscle conditioning.”

Whereas ECMO is traditionally started in the intensive care unit (ICU) or an operating room, mobile ECMO allows a patient experiencing catastrophic arrest anywhere in the medical complex to have ECMO started, be stabilized, and then transferred to an ICU.

Duke has also established relationships with local and regional hospitals, allowing them to begin ECMO at their facility and then transport the patient to Duke to continue this lifesaving care.

“It’s amazing to see patients after ECMO, later on in life,” says Li. “It’s remarkable that children can be saved with this technology when they would have otherwise been expected to die.”