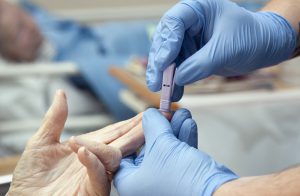 Perioperative blood glucose control is more accurate than preoperative A1c levels in predicting short-term mortality after surgery, according to a retrospective study of cardiac and noncardiac surgeries at Duke.

The study also reported that patients with glucose levels between 120 and 160 mg/dL experienced the lowest mortality rates following cardiac surgery.

A group of Duke endocrinologists, anesthesiologists, and statisticians presented the findings during the American Diabetes Association meeting in June 2017.

Tracy L. Setji, MD, an author of the study and medical director for the Endocrinology Inpatient Consultation Service at Duke, says the importance of perioperative glucose control in determining risk of postoperative mortality is the study’s most significant finding.

The large, single-center study reviewed 432,480 surgeries in the Duke database performed from 1999 through 2013. The team extracted 6,684 noncardiac and 6,393 cardiac procedures that met the study criteria.

“In our analysis of cardiac surgeries, we saw a quite striking U-shaped curve indicating there is a smaller threshold for ideal glucose levels in postoperative care,” Setji says. “We found that patients whose perioperative sugar levels measured between 120 and 160 mg/dL experienced the lowest postoperative mortality after 30 days.”

The team initiated the study to develop definitive data about the predictive value of A1c levels in terms of postsurgical mortality, Setji says. Additionally, she notes, optimal glucose levels in surgical settings are largely unknown.

The findings also help Setji and colleagues perform consultations while preparing patients for surgery. Although most patients undergo testing for blood sugar levels prior to surgery, many—particularly those undergoing vascular or cardiac procedures, for example—require urgent procedures during which extensive blood testing cannot be performed in advance.