A 20-year-old college soccer player sustained a hip injury that caused pain with weight bearing. At her school's student health center, she was told there was nothing wrong and was provided no treatment.

In pain and unable to walk without the aid of crutches, the patient sought the opinion of an orthopaedic surgeon, who performed radiography and magnetic resonance imaging. He was unable to provide a diagnosis and referred her to physical therapy, which did not improve her mobility or alleviate pain.

Months later, the patient consulted another orthopaedic surgeon. Undergoing more imaging, she was told she might have a torn ligamentum teres deep within the hip, but she was given no definitive diagnosis. The surgeon recommended arthroscopy to treat the suspected tear.

Question: What diagnosis was Lewis able to make? 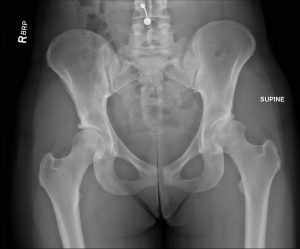 Answer: Based on additional imaging, Lewis determined the patient's injury was due to a fractured acetabulum. In addition, a review of her prior imaging results showed underlying hip dysplasia. The combination of the fracture and dysplasia led her to develop early arthritis (Figure 1).

To address the patient's injury and the underlying issues, Lewis partnered with Duke orthopaedic surgeon Steven A. Olson, MD, who performed surgical hip dislocation with fixation of the acetabular fracture and osteochondral autograft transplantation surgery (OATS). The patient then underwent periacetabular osteotomy (PAO) for her hip dysplasia.

"The goal was to prolong the life of the hip so the patient could get back to playing soccer as soon as possible," says Lewis. "We would not have been able to achieve this by performing hip replacement surgery. Unfortunately, it's likely she will need to have this done in the future as her arthritis progresses."

Lewis and Olson surgically dislocated the patient's hip to repair the fracture on the posterior acetabulum and evaluated her arthritis, which was moderately advanced, with a focal area where all of the cartilage had been lost, exposing the bone. 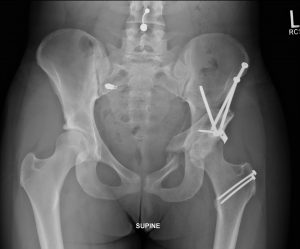 FIGURE 2. Postoperative radiography of the anteroposterior pelvis demonstrating improvement in the patient's joint space, now measuring approximately 2 mm. Hardware is in place to repair the acetabular fracture as well as at the osteotomy sites in the femur from the surgical dislocation and the pelvis from periacetabular osteotomy. All osteotomy sites are either healed or demonstrate continued progression of healing

Lewis and Olson then performed the OATS procedure, transplanting cartilage and bone from another, non–weight-bearing area of the femoral head to the area of exposed bone. Lastly, they made a separate incision on the anterior of the hip to perform PAO, repositioning the acetabulum to properly cover the femoral head.

"If you perform PAO when the patient has no arthritis in the hip, the survivorship in providing a non-arthritic hip is 20 years or longer," explains Lewis. "Given her underlying arthritis, her hip may progress sooner than that."

The patient spent 5 days recovering at Duke Regional Hospital. After conferring with Lewis, anesthesiologists inserted an epidural catheter to control her pain and enable her to begin physical therapy, while restricting her weight bearing to 20 to 30 pounds.

Imaging conducted at the patient's 12-week follow-up visit showed that the osteotomy sites had healed and that there was an improvement in her joint space (Figure 2).

The patient is now experiencing minimal pain, her strength is returning, and she reports that she feels great. She is continuing with physical therapy and working with a team of personal trainers, with the goal of returning to competitive soccer for the fall season.

"Until recently, there wasn't a lot of emphasis on the causes of young-adult hip pain," says Lewis. "In this patient's case, she is a young and active person with an injury. Without diagnosing the cause of her injury, she would have continued to experience pain, and her hip dysplasia would have contributed to the progression of her arthritis."