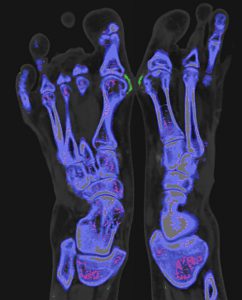 A meta-analysis of the comparative efficacy of corticosteroids and nonsteroidal anti-inflammatory drugs (NSAIDs) suggests that they offer similar outcomes in the treatment of acute gout.

In a study published online in the Journal of Rheumatology in August 2017, the authors examined 6 trials involving a total of 817 patients. Although the investigators found no difference in efficacy between corticosteroids and NSAIDs in managing pain in acute gout, they reported that corticosteroids appeared to have a more favorable safety profile for select adverse events.

Although gout is the most common inflammatory arthritis in the United States, its prevalence and incidence continue to increase despite greater knowledge of causative factors and pathophysiology, Keenan says.

Only 3 medications have been approved by the US Food and Drug Administration (FDA) for acute gout (indomethacin, naproxen, and sulindac), but Keenan notes that almost any NSAID used at the maximum anti-inflammatory doses would be sufficient to treat acute gout attacks. Celecoxib, he cautions, typically requires much higher doses than the current dose approved by the FDA.

The new meta-analysis, Keenan says, supports the American College of Rheumatology’s current findings of no difference between corticosteroid- and NSAID-based pain management.

“When choosing therapy for a patient, it is essential to individualize treatment based on comorbidities and contraindications to minimize potential adverse events,” Keenan says.

Not all gout flares will respond to just one medication, he says. Some patients may require combinations of corticosteroids and colchicine, or NSAIDs and colchicine, to reduce the pain, swelling, and inflammation.