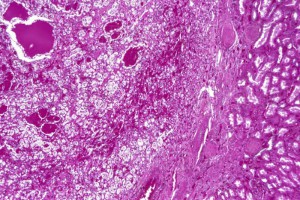 In January 2014, a 68-year-old man consulted his physician after noticing hematuria. Computed tomography revealed a 13-cm mass in his right kidney, a large mass in his left adrenal gland, and multiple lung nodules.

After the findings of additional imaging confirmed metastatic kidney cancer, the patient was referred to Duke Health, where his right kidney and a liver nodule were resected, revealing stage IV clear cell renal cell carcinoma that had metastasized to his lungs.

The patient enrolled in a clinical trial at Duke for a new, individualized immunotherapy in combination with sunitinib, an antiangiogenic agent. However, the cancer continued to rapidly progress, and, after 8 months, he was removed from the trial.

By September 2015, the patient had also tried 4 therapies approved by the US Food and Drug Administration (FDA). The tumor was still rapidly metastasizing through his lungs, requiring increasing amounts of oxygen and causing severe dyspnea.

Question: Rather than palliative care, what alternative therapies were recommended to the patient?


Answer: Physicians at Duke Health recommended that the patient begin infusions with nivolumab, and his disease is now in partial remission.

“At that point, we knew nivolumab was going to be approved,” explains Andrew Armstrong, MD, the patient’s oncologist. “Positive results from the phase 3 clinical trial had just been presented, and we were able to get this approved by our Duke formulary committee and covered for him to use prior to FDA approval.”

Armstrong was initially concerned about how long it would take the drug to have an effect. As an immune checkpoint inhibitor, nivolumab prevents cancer cells from suppressing the immune response.

“Checkpoint inhibitors often take a long time to work—sometimes months. This patient did not have months, but he still had hope and a desire to fight on,” Armstrong says.

At first, the patient’s health deteriorated. The tumor had begun to encircle his lung, and it became difficult for him to get out of bed or speak above a whisper. However, the patient slowly began to recover.

He received a fourth dose at month 2, and his oxygen was reduced. Two weeks after that, he no longer needed supplemental oxygen. After 6 months of nivolumab infusions, the patient’s overall health had improved and the tumors in his liver and lungs had shrunk.

“What’s dramatic,” Armstrong says, “is that, before the infusions, I would have given him 1 to 2 months to live. He was entertaining going into hospice and had requested a do-not-resuscitate order. Now, he’s thinking about traveling and going on vacation.”

Armstrong notes that Duke’s involvement in clinical trials, including the trials that led to the approval of nivolumab, has allowed him to offer alternative therapeutic options to his patients. Sometimes, as in this case, he can provide the therapies to patients before they become routinely available.

Current research at Duke is examining whether nivolumab in combination with other therapy may also be beneficial as an initial treatment option and is testing newer immunotherapies for kidney cancer.