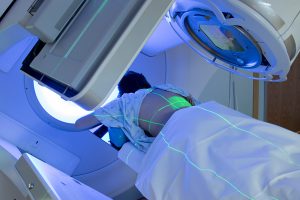 Even though clinical guidelines recommend the use of neoadjuvant chemoradiation to treat stage II and III rectal cancers, many patients do not receive stage-appropriate chemoradiation, potentially because data demonstrating  survival benefits are inconsistent.

Unlike previous clinical trials, the new analysis, published by Duke investigators in June 2017 in Colorectal Disease, examined the effects of neoadjuvant chemoradiation on a national level in a broad range of care settings, from community hospitals to tertiary care academic centers. The study was also unique in its large cohort size—enabled by the retrospective nature of the research—which, according to the authors, allowed the analysis to be adequately powered to discern differences in outcomes between treatment groups.

“Adherence to rectal cancer treatment guidelines in the United States is suboptimal,” explains the study’s lead author, Xhifei Sun, MD, a resident physician in Duke Surgery. “We think this may at least in part be due to the lack of consistent data regarding the impact of neoadjuvant chemoradiation on patient survival.”

To identify patients, the investigators queried the NCDB for patients diagnosed with clinical stage II or III rectal adenocarcinoma between 2006 and 2012. They then examined differences in perioperative outcomes and overall survival between 4 patient groups: no therapy (29.5%), chemotherapy only (2.7%), radiotherapy only (3.5%), or chemoradiation (64.3%).

The investigators found that, compared with no therapy, the use of chemotherapy alone or radiotherapy alone was not associated with differences in margin positivity, sphincter loss, unplanned perioperative readmission, or 30-day postoperative mortality. In contrast, the use of chemoradiation was associated with a reduced likelihood of positive margins, sphincter-loss surgery, and postoperative mortality. Patients who received chemoradiation did have a slightly increased risk of postoperative readmissions.

Of the more than 30% of patients who did not receive any neoadjuvant therapy, most were relatively older, female, and more likely to be treated at a community hospital. They also had more comorbidities and were more likely to present with later-stage disease. Race and insurance status had no association with compliance with chemoradiation.

These findings suggest that hospital- and provider-related factors play the largest role in predicting whether a patient will receive chemoradiation. Therefore, given that chemoradiation is associated with better long-term survival in patients with stage II and III rectal cancer, changes to health care strategy that seek to improve adherence can significantly improve patient outcomes.

“This study clearly demonstrates the benefit of chemoradiation for stage-specific rectal cancers,” concludes Christopher Mantyh, MD, the study’s senior author and the chief of Gastrointestinal and Colorectal Surgery at Duke. “Unfortunately, this is not occurring in the United States. All physicians and hospitals who manage these patients need to understand the treatment guidelines for rectal cancer patients. Hopefully with improved adoption of these algorithms, we will continue to improve cancer outcomes in these patients.”