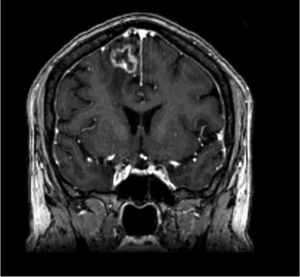 A 66-year-old woman presented to her primary care physician with hemoptysis. Findings on magnetic resonance imaging (MRI) revealed oligometastatic adenocarcinoma of the lung that had metastasized to her brain. She underwent treatment with Cyberknife (Accuray, Sunnyvale, CA) for the metastases in her brain and received concurrent chemoradiotherapy directed to her lungs and chest.

After 2 cycles of chemotherapy and 2 targeted therapies, the patient visited a radiation oncologist for follow up. She had been experiencing weakness in her left hand and an overall sense of imbalance. MRI of her brain revealed an enhancing mass on the right frontoparietal lobe that corresponded to the targeted area of prior radiotherapy (Figure 1).

She was then referred to John P. Kirkpatrick, MD, PhD, a radiation oncologist in the Brain Metastasis Program at Duke University Hospital.

Questions: The patient’s neurologic dysfunction and the reappearance of an enlarging, contrast-enhancing lesion at the site of prior radiotherapy 8 months after treatment were suggestive of what diagnosis? How was this diagnosis confirmed, and how was it treated?

Answers: The lesion was suggestive of radiation “necrosis.” Findings on biopsy confirmed the diagnosis, and the patient was treated with intraoperative, MRI-guided laser interstitial thermal therapy.

When the patient first arrived at Duke, Kirkpatrick started her on dexamethasone. The steroid ameliorated the weakness in her left arm, further raising suspicion for radiation necrosis.

After reviewing the patient’s findings on MRI of her brain, Kirkpatrick referred her for consultation with Peter Fecci, MD, PhD, neurosurgeon and director of the Brain Tumor Immunotherapy Program.

Fecci explains that 1 goal of the program is to have specialists working together to distinguish between radiation necrosis and recurrent tumor and then to provide appropriate treatment for patients.

“MRI won’t tell you whether it’s radiation necrosis or lesion recurrence,” says Fecci. “Often patients get treated for one over the other without confirmation of which one it is.”

Together with the patient, Fecci developed a plan: He would conduct a biopsy, and immediately after he would perform either surgical resection in the case of recurrent tumor, or, in the case of radiation necrosis, he would administer laser interstitial thermal therapy. This type of treatment is a relatively new, minimally invasive option for radiation necrosis that is also effective against recurrent tumor. 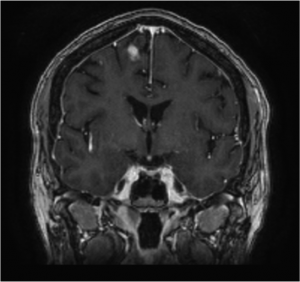 MRI obtained 8 months postoperatively showed that the lesion had involuted (Figure 2). All that remained of the necrotic region was a small scar, an outcome that Fecci says indicates a good clinical response. More importantly, the patient remained steroid-independent and neurologically intact.

“Intraoperative MRI-guided laser interstitial thermal therapy isn’t available at very many places,” says Fecci. “That’s one advantage of coming to Duke: We have access to some of the latest technologies, which allows us to treat conditions like radiation necrosis that otherwise have few to no treatment options.”

He adds that the technology offers efficacy against any tumor cells that may have been present and missed on biopsy. “This is truly a technology that changes our capacity to care for patients with brain metastasis.”

In an effort to provide streamlined care to patients with brain metastases and/or radiation necrosis resulting from prior treatment, Duke Neurosurgery, in conjunction with medical oncology, radiation oncology, and neuro-oncology specialties, established the Brain Metastasis Program in 2014. Through the program, patient care is carefully coordinated between the relevant specialties, and patients benefit from new, minimally invasive treatment options like laser interstitial thermal therapy. 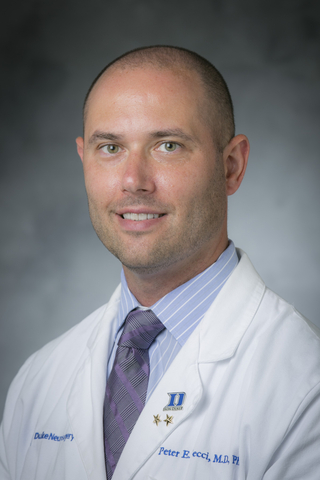