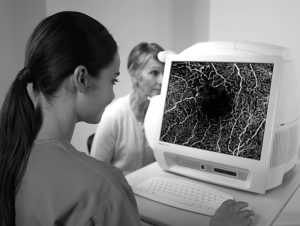 Earlier this year, clinicians at the Duke Eye Center, in collaboration with the Duke Memory Disorders Clinic, launched a prospective clinical study to determine whether quantitative assessment of the retinal microvasculature can predict the development of mild cognitive impairment (MCI) and Alzheimer disease (AD). The study seeks to identify early, noninvasive diagnostic biomarkers and provide a proof of concept for optical coherence tomography (OCT) angiography as a screening tool for the development of cognitive impairment, specifically AD.

Interest has been growing in identifying biomarkers that would allow the early diagnosis of cognitive impairment in AD, says one of the study’s investigators, Sharon Fekrat, MD, a retinal surgeon at Duke. Although evidence suggests that small-vessel cerebrovascular changes are associated with cognitive impairment, methods of assessing these changes are invasive, costly, and lacking in specificity and sensitivity. As a result, researchers have turned their attention toward examining other small blood vessels, such as the retinal vascular network.

Fekrat cites a recent example in her clinic as an additional impetus for the study: OCT angiography in a pair of 96-year-old monozygotic twins, discordant for AD, revealed differences in retinal microvasculature corresponding with disease state. The twin with advanced AD had significant loss of retinal vascular density in the superficial capillary plexus, a larger foveal avascular zone, and decreased thickness of her subfoveal choroidal compared with the twin without cognitive impairment, providing evidence that changes to the retinal microvasculature may reflect cognitive impairment.

Previous studies on retinal markers of cognitive impairment have typically focused on retinopathy that is visible on a regular dilated eye examination; however, this is likely to be a relatively late indicator of disease. The Duke study, by contrast, Fekrat explains, is assessing a panel of potential early markers of structural microvascular changes using the Zeiss Cirrus OCT angiography, a sensitive, noninvasive method of mapping the retinal capillary network and choriocapillaris.

The study will also be much larger in scale than previous studies. Whereas the few published studies that have examined changes to the retinal microvasculature have been small pilot studies, the Duke team plans to enroll 100 patients with MCI or AD and 100 control participants with no diagnosis of neurodegenerative disease.

“If this study demonstrates that MCI and AD can be diagnosed early, before clinical symptoms develop, then it will change the landscape of patient recruitment for and evaluation in multicenter clinical trials for AD and can be used to measure the effects of various medications in delaying the onset and progression of AD,” Fekrat concludes.