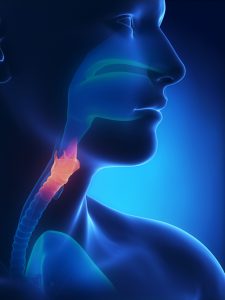 A Broadway performer noticed her voice deteriorating in the week leading up to a demanding production in North Carolina. Her voice was getting tired quickly, and she was struggling to change her voice quality for the various sounds she had to produce for the show. Eight months earlier, she had undergone surgery in New York for varices on her right vocal fold.

Rattled, she called the Duke Voice Care Center and was scheduled for an appointment that day with a voice therapist and head and neck surgeon David Witsell, MD, who focuses on laryngology. Witsell performed a head and neck examination, and the vocal therapist performed videolaryngostroboscopy.

Videolaryngostroboscopy, which provides an accurate, magnified view of the vocal folds, revealed swelling in the right vocal fold that was preventing the vocal folds from fully vibrating.

Witsell prescribed prednisone to decrease the edema and scheduled a vocal therapy appointment for later that day with singing voice specialist Leda Scearce, MM, MS, director of the Performing Voice Programs and Development at the voice center.

Scearce worked with the patient in daily voice therapy sessions for the next 6 days, helping her develop techniques to meet the vocal demands of the show without further injuring herself. The day before the show, the patient texted Scearce in a panic: She had suddenly started losing her voice.

Question: What condition did Scearce and Witsell diagnose, and what was their recommendation to the patient?

Answer: Scearce performed another videolaryngostroboscopy, the results of which revealed a discrete, hemorrhagic polyp on the patient’s right vocal fold. Witsell started the patient on another course of prednisone to decrease potential scarring, and her health care team advised her to go on complete vocal rest.

As a true vocal emergency, hemorrhage must be diagnosed and treated immediately, Scearce and Witsell agree.

“Some performers have subtle swelling that doesn’t show up on standard laryngoscopy, so they’ll be told they’re fine and continue performing,” Witsell says. “In this case, that might have caused permanent scarring that would have been career-ending. It was essential that she stop doing the show.”

It was a difficult message to convey to the performer, who had been trained to have a “the show must go on” mentality, Scearce says.

“We think of medical complexity in terms of the physiological and medical components,” she notes. “But this is also medically complex because it affects the patient’s livelihood and, to her, her very existence.”

After confirming the diagnosis, Witsell coordinated with the patient’s surgeon in New York so that the patient could return home to have the polyps removed.

The patient returned to North Carolina for another set of performances 6 weeks later. She had been unable to find a voice therapist she felt comfortable working with in New York and postponed therapy until her return.

Scearce began working with the patient 2 to 3 times a week, guiding her through semi-occluded vocal tract exercises and communicating with the show’s production team to help them understand the need to modify rehearsals.

Weeks later, the show opened. Scearce reports that the show’s run was a success, and the patient sounded great.