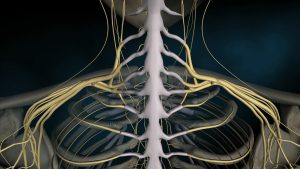 Eight people with paralysis for at least 1 year due to spinal cord injury (n = 7 complete, n = 1 partial) have regained partial sensation and muscle control in their lower limbs after training with brain-controlled robotics, according to a study published in August in Scientific Reports.

The brain-machine interfaces employed in the study included a virtual reality system that used the patients’ own brain activity to simulate full control of their legs. Videos accompanying the study illustrate the progress of the study patients.

The research, led by Duke University neuroscientist Miguel Nicolelis, MD, PhD, as part of the Walk Again Project in São Paulo, Brazil, offers promise as a way for people with spinal cord injury, stroke, and other conditions to regain strength, mobility, and independence.

“We couldn’t have predicted this surprising clinical outcome when we began the project,” says Nicolelis, co-director of the Duke Center for Neuroengineering.

“What we’re showing in this paper is that patients who used a brain-machine interface for a long period of time experienced improvements in motor behavior, tactile sensations, and visceral functions below the level of the spinal cord injury,” he says. “Until now, nobody has seen recovery of these functions in a patient so many years after being diagnosed with complete paralysis.”

At the beginning of rehabilitation, 5 participants had been paralyzed for at least 5 years, and 2 had been paralyzed for more than 10 years. After 1 year of training, the sensation and muscle control of 4 study patients changed significantly enough that their clinicians upgraded their diagnoses from complete to partial paralysis.

Most patients also saw improvements in bladder control and bowel function, thus reducing their reliance on laxatives and catheters. These changes reduce the risk of infections, which are common in patients with chronic paralysis and are a leading cause of death.

Nicolelis and colleagues believe that the weekly training enabled the study patients to re-engage spinal cord nerves that had survived the impact of the vehicle collisions, falls, and other trauma that had caused lower-limb paralysis.

“One previous study has shown that a large percentage of patients who are diagnosed as having complete paraplegia may still have some spinal nerves left intact,” Nicolelis says. “These nerves may go quiet for many years because there is no signal from the cortex to the muscles.”

He adds, “Over time, training with the brain-machine interface could have rekindled these nerves. It may be a small number of fibers that remain, but this may be enough to convey signals from the motor cortical area of the brain to the spinal cord.”

Nearly all of the participants described in the study have continued their rehabilitation—now exceeding 2 years of training. Nicolelis and colleagues plan to publish additional data about the participants’ continued progress. They also plan to enroll patients with more recent spinal cord injuries in a new trial to determine whether quicker treatment can lead to faster or better results.