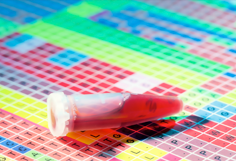 A common question during flu season involves determining whether a respiratory illness is caused by a bacterial or viral infection—and this is a question that may eventually be answered by a rapid blood test during an office visit.

A team of infectious diseases and genomics experts at Duke Health has developed gene signatures, or patterns, that reflect which of a patient’s genes are turned on or off in the face of viral or bacterial infection or no infection at all.

The researchers studied gene signatures in respiratory infections for nearly a decade, says Geoffrey S. Ginsburg, MD, PhD, director of Duke’s Center for Applied Genomics and Precision Medicine. Previous findings focused on viral infections alone. This is the first study to distinguish between noninfectious and infectious illnesses as well as viral and bacterial infections at the patient’s molecular level.

The signatures were tested in an observational study described in the January 20, 2016, issue of Science Translational Medicine. They were found to be 87% accurate in classifying more than 300 patients with flu viruses, rhinovirus, several streptococcal bacterial infections, and other common infections. They also proved effective in showing when no infection was present.

“About three-fourths of patients end up on antibiotics to treat bacterial infection, despite the fact that the majority have viral infections,” says Ephraim L. Tsalik, MD, an assistant professor of medicine at Duke.

The findings bring Duke a significant step closer to developing a rapid blood test that can be used in clinics to guide appropriate treatment. Results cannot yet be completed during an office visit, but that is a key objective of the research.

Currently, measuring a person’s gene expression profile from the blood can take as long as 10 hours, but the researchers are working to create a 1-hour test to be used in clinics.

“We are working to develop a test that could be run in most clinical laboratories on existing equipment,” explains Christopher W. Woods, MD, a professor of medicine and associate director of Duke’s Genomics Center. “We believe this could have a real impact on the appropriate use of antibiotics and guide the use of antiviral treatments in the future.”

If the test is approved for broad use and if technology accelerates the test findings, Woods says, then an ideal scenario would give clinicians the results even before they see patients.