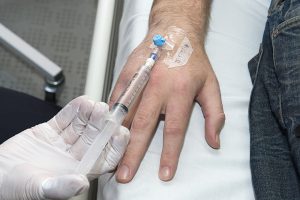 The approval by the US Food and Drug Administration of the first biosimilar monoclonal antibody (infliximab-dyyb) in the United States in April 2016 intensified discussion among rheumatologists about the future of this type of formulation and its significance in medical therapy.

With the approval of a fifth biosimilar in April 2017, biosimilars are beginning to enter rheumatology practice in the United States, physicians say, and should offer advantages in cost. Infliximab, a tumor necrosis factor (TNF) blocker for which 2 biosimilars are now available, is FDA approved to treat rheumatoid arthritis, ankylosing spondylitis, inflammatory bowel disease, and psoriatic arthritis. The availability of 2 biosimilars for infliximab has led to significant cost savings; however, it's not yet known whether the savings will allow more patients to be treated with infliximab and its biosimilars.

“These agents are now the subject of a great deal of conversation in the rheumatology community,” says David Pisetsky, MD, PhD, a rheumatologist and researcher in Duke’s Division of Rheumatology and Immunology. “Biosimilars thus far have a very good safety record, but we need to gain more experience with their use and any concerns about comparisons to the originator or reference product.”

Among the key issues to investigate, Pisetsky says, is whether a patient treated with the originator product can be switched to a biosimilar.

“Can we switch a patient from an originator TNF blocker to a biosimilar? Or should we opt to use this agent only from a new start?” he asks. “Questions such as these are not easy to answer right now for every biosimilar.”

Physicians prescribing biosimilars must look for an interchangeability designation, Pisetsky says, which means the biosimilar can be substituted for the reference product by a pharmacist. State laws may also affect the use of biosimilars.

Unlike generic drugs, which are chemically synthesized, biosimilars are produced by living systems, such as cells growing in culture. Because of the complexity of their creation, biosimilars may not be exact replicas of the formulations they are designed to replace: As proteins, biologics are subject to certain kinds of modification because they are produced by cells.

Biosimilars are reviewed under an abbreviated FDA review process known as the 351(k) pathway. Europe has safely introduced more biosimilars than the United States, but production is expected to increase in both countries for several reference products.

“Thus far, biosimilars have a very good record of safety and efficacy,” Pisetsky says. “Because of the complicated nature of biologics, it may be difficult for a physician to fully understand the differences in these products. The available research is just coming into focus as biosimilars are coming onto the market.”

The infliximab biosimilar products will carry the same concerns for infection as the reference product. For TNF blockers, tuberculosis is a concern, and patients should be screened before beginning treatment.