On September 10, 2014, a team of Duke eye experts implanted a retinal device in the first patient to receive the so-called “bionic eye” in North Carolina, making the device one of only seven that have been implanted in patients in the United States (US) since the US Food and Drug Administration approved the device last year. Designed for patients who are essentially completely blind from retinitis pigmentosa (RP), the Argus II™ Retinal Prosthesis System is a retinal implant that fits around and inside the eye and provides electrical stimulation of the retina to induce visual perception. 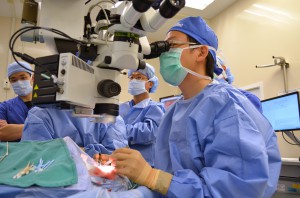 The surgery on this 66-year-old patient went according to the careful plan of lead surgeon Paul Hahn, MD, PhD. He was assisted by his colleague, Prithvi Mruthyunjaya, MD, during the delicate 4-hour microscopic procedure.

After cutting into the left eye, Hahn attached the electrode panel of the retinal implant system to the retina. (The rest of the system is external and noninvasively activated.)

When the implant is stimulated, patients can generally see flashes of light and high-contrast items, such as a crosswalk in a street or an open doorway. Some patients may also be able to see large letters and locate and sort objects. “This level of vision may seem insignificant to those with normal sight, but for patients with end-stage vision loss, these improvements are quite profound,” explains Hahn.

After surgical recovery, the bionic eye recipient receives glasses with an attached camera and a portable video processor to wear. A miniature video camera, housed in the patient’s glasses, captures the scene. That video is then sent to the processor where it is converted into electrical instructions that return to the glasses.

The instruction signals are transmitted wirelessly to the implanted electrode array on the retinal surface, which emits small pulses of electricity. These pulses bypass the photoreceptors damaged by RP and stimulate the retina’s remaining healthy cells. Those cells transmit the visual information along the optic nerve to the brain, creating the perception of patterns of light. With training, patients learn to interpret these visual patterns.

“I expect this device, which provides the first means of artificial vision, to be a milestone in our approach to retinal diseases,” Hahn says. Of those diagnosed with RP, roughly 10,000 patients experience a level of vision loss that will make them eligible for the retinal prosthesis.

The Duke Eye Center hopes to implant at least 4 of the devices during the next year. Manufacturer Second Sight recently named Duke University Hospital as one of 13 facilities in the US to offer the new prosthetic system.

Several components of the device were conceived and developed by Duke Eye Center alumni, says Mruthyunjaya. “Duke has a long history of working to innovate in and advance vitreoretinal health. Dr. Hahn worked hard to make sure we would become an approved center for this new retinal system, which is a quantum leap for patients who have no other options.”

Mark Humayun, MD, PhD, began developing the bionic eye technology 20 years ago at Duke and conducted the initial electrical stimulation studies of the retina during his residency at Duke before moving to his current position as co-director of the USC Eye Institute and Cornelius J. Pings Chair in Biomedical Sciences at the University of Southern California.