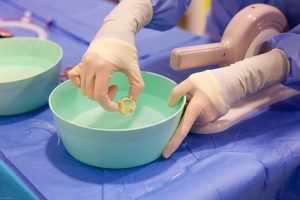 Biologic valves used in transcatheter aortic valve replacement (TAVR) procedures continue to perform well up to 5 years after implantation, according to the results of a study investigating valve durability.

In the study, published online in JAMA Cardiology in September 2017 and led by a member of the Duke Clinical Research Institute (DCRI), researchers reviewed data and follow-up from the first and largest studies of TAVR safety and concluded that biologic valves are durable in open-heart procedures.

“These findings are incredibly reassuring at least out to 5 years,” says lead author Pamela Douglas, MD, the Ursula Geller Professor for Research in Cardiovascular Diseases at Duke. “The valve is quite durable and safe.”

TAVR is used in older patients who are not good candidates for open-heart procedures. But research establishing its durability over 5 to 10 years has been lacking, which created questions about whether the biologic valves should be used in younger and healthier people.

Douglas and colleagues analyzed data from more than 2,700 patients who had been part of the large PARTNER trial, which established the safety of TAVR. Study participants received either a minimally invasive TAVR procedure or open-heart surgery to replace the valve.

All of the participants received biologic valves developed from animal or donated human tissue. Biologic valves are increasingly favored over mechanical valves, which must be surgically implanted and require long-term use of anticoagulation drugs to protect against blood clots.

In their analysis, the study authors also included echocardiograms of about 475 patients 5 years after either their minimally invasive or surgical valve replacement. The average age of patients in the study group was 84.5 years, and many had additional serious health risks.

These findings are incredibly reassuring at least out to 5 years. The valve is quite durable and safe.
Pamela Douglas, MD, the Ursula Geller Professor for Research in Cardiovascular Diseases at Duke

Among the 2,404 patients in the study who underwent TAVR, 34% survived 5 years. Similarly, 37% of the 313 patients whose valves were replaced in an open-heart surgery also survived 5 years. Twenty TAVR patients (0.8%) required a second valve procedure, and only 5 of the revisions arose from structural deteriorations of the valve.

The researchers found evidence that 3.7% of TAVR patients developed a condition in which the valve allowed blood to flow back into the heart, and this condition increased over time.

“This was seen in only a handful of patients, but it’s certainly something of concern and warrants further study,” Douglas says. “Overall, however, the findings from this carefully designed study demonstrate that there is little evidence of valve failure or deterioration for either TAVR or surgery using biologic valves.”