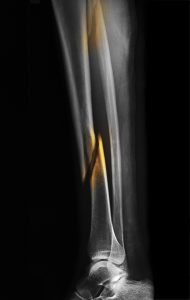 After he was involved in a bicycling collision, a 34-year-old, accomplished athlete presented to the Duke University Hospital emergency department. Computed tomography and radiography revealed a spiral distal tibia fracture extending down into the patient's ankle joint, as well as a proximal fibula fracture.

Orthopaedic residents splinted his leg overnight, expecting surgery to be performed the next day. The following morning, however, the patient had developed blisters at the injured site. This indication of swelling made acute surgery unadvisable. The Duke team opted for temporary external fixation at that time, with the intention of performing definitive fixation surgery within 7 days.

Throughout the examinations and during treatment assessments, the patient expressed a desire to return to competition as soon as possible. After 1 week, the swelling subsided enough to proceed with fixation surgery.

This type of surgical repair typically involves insertion of a plate and screws to rejoin the bone, but the patient would not be weight-bearing until healing began, which typically requires 8 to 12 weeks. After reviewing the option and his expected recovery time, the patient conferred with Duke’s foot and ankle, sports medicine, and trauma specialists regarding the best way to proceed.

Question: What procedural innovation was used to allow the patient to quickly return to competition?

Answer: Rachel M. Reilly, MD, a Duke orthopaedic trauma surgeon, recommended insertion of an intramedullary nail into the tibia and percutaneous screws to separately fix the portion of the fracture that extended into the ankle joint. The procedure was complex, but reduced healing time was a priority for the patient.

“The rod would enable him to bear weight on the bone after just 6 weeks,” Reilly says. “Given the patient’s desire to exercise and compete in marathons and triathlons, enabling him to bear weight 2 to 6 weeks sooner was significant.”

The latter option had another advantage. “By placing the intramedullary nail, we were able to use smaller incisions,” Reilly says. “This usually means the patient’s pain will subside more rapidly.”

On postoperative week 2, the patient could already begin working on range of motion in his ankle and knee. To further reduce his healing time, a bone stimulator—a small, ultrasound machine—was placed at the fracture site for 20 minutes per day.

Six weeks after surgery, radiography was obtained and showed that the patient’s healing was sufficient enough for him to engage in weight-bearing therapy. “He progressed quickly, which I expected because he was in great shape and was quite motivated,” says Reilly, who conferred with the patient’s physical therapist during his rehabilitation at Duke.

The patient completed a 50-mile race 8 weeks following surgery and has made a full recovery without restrictions.