A 90-year-old man with progressive shortness of breath and weakness was seen in consultation at Duke. He had been a pilot for the Allied forces, flying a B26 bomber out of England over mainland Europe. Widowed for about 10 years, he now lives near one of his sons.

Accompanied by his son to the appointment, the patient was mildly tachypneic at rest but mentally sharp and physically able to get onto the examining table. He had remained physically active, even playing golf, until he experienced a myocardial infarction earlier in the year.

Following his heart attack, the patient was found to have 2-vessel coronary artery disease as well as severe aortic stenosis. He was successfully treated at a local hospital with coronary stents for disease in his left anterior descending and circumflex coronary arteries. After discharge, however, he reported that any level of activity left him feeling weak and short of breath.

After evaluation at Duke, he was noted to have mild renal dysfunction (GFR = 44 mL/min/1.73 m2) and moderate pulmonary hypertension. His left ventricular ejection fraction was 35%; his aortic valve was heavily calcified and immobile, mean aortic valve gradient 52 mm Hg. The patient was considered to be a high-risk candidate for open conventional surgery given his advanced age and coexisting renal dysfunction.

What treatment options are available to this patient? 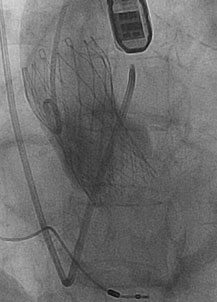 Radiographic angiogram of the ascending aorta with a CoreValve device in place immediately after implantation.

A detailed CT angiogram from his neck to thighs was obtained to evaluate the aortic valve annular dimensions and to assess his arterial vessels for vascular access options. His annular dimensions were too large for commercially available TAVR, and he was enrolled in the investigational continued-access arm of the CoreValve device trial.

He subsequently received this treatment; the CoreValve device was delivered via the right femoral artery. The patient did well with the procedure and was discharged home on post-operative day 5.

His new valve function has been excellent. Now the patient is active again, no longer short of breath, playing some golf, and walking as part of his rehabilitation plan.

“The TAVR proof of concept is clear, and the next generation of stent valves holds the promise to be even better for patients,” says J. Kevin Harrison, MD, the interventional cardiologist and primary physician on the case. “We will be enrolling patients into investigational trials of the second-generation valves in 2014 at Duke. As the TAVR technology and implantation techniques evolve, we should see smaller delivery systems and more precise control over the implant procedure resulting in aortic valve devices that function even better and are implanted with lower risk.”