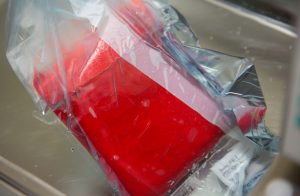 Scleroderma with internal organ involvement remains a debilitating and lethal autoimmune disorder with few effective treatments. But researchers led by a Duke physician have found reason to be optimistic after analyzing the results of a study exploring an aggressive stem cell transplantation regimen.

“Scleroderma hardens the skin and connective tissues and, in its severe form, leads to fatal organ failure, most often the lungs,” says lead author Keith Sullivan, MD, the James B. Wyngaarden Professor of Medicine and Cellular Therapy at Duke. “In these severe cases, conventional drug therapies are not very effective long term, so new approaches are a priority.”

Sullivan says previous research suggested that stem cell transplantation might be viable by using less intensive treatment without irradiation. These studies showed that reduced-intensity stem cell transplantation improved survival, but the disease often recurred. As a result, conventional immunosuppressive drug treatment remained the standard of care in the United States.

Sullivan and colleagues developed a transplantation conditioning regimen that included high-dose chemotherapy plus whole-body radiation to fully destroy the patient’s defective immune-forming system to improve survival and diminish the effects of the disease. They lowered radiation risks by shielding patients’ kidneys and lungs while repopulating the blood and immune system.

In the study, 36 patients with scleroderma were randomly assigned to receive transplantation. The regimen destroyed the patients’ defective autoreactive immune system and replaced it with the patient’s blood stem cells that had been removed and treated to eliminate self-reacting lymphocytes. Another 39 patients were randomized to receive 12 monthly intravenous injections of cyclophosphamide, a conventional immune-system–suppressing treatment for severe scleroderma.

The study was conducted over 10 years at 26 universities in the United States and Canada. The primary endpoint at 54 months was a global rank composite score based on a hierarchy of scleroderma features including survival, organ function, quality of life, and skin hardening. Results showed significant benefit with transplantation: 67% of 1,404 pairwise comparisons favored transplantation vs 33% favoring cyclophosphamide.

By study endpoint, fewer transplantation recipients resumed the use of anti-scleroderma drugs (9% vs 44% of control group). Overall survival at 72 months was 86% after transplant vs 51% after cyclophosphamide—a highly significant benefit.

“These results show that individuals with poor-prognosis scleroderma can improve and live longer and that these advances appear durable,” Sullivan says.

“Patients and their doctors should carefully weigh the pros and cons of intensive treatment with stem cell transplant, but this may hopefully set a new standard in this otherwise devastating autoimmune disease,” Sullivan says.