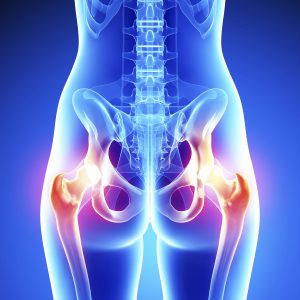 A physically active, 25-year-old former college volleyball player presented to an orthopaedic practice with severe hip pain. The discomfort had been increasing for 2 years as she hiked Himalayan mountain trails while working in Nepal. After returning to the United States, the painful hip condition dramatically worsened when she began training for a marathon.

An orthopaedic specialist diagnosed her with hip dysplasia, a common abnormality that can lead to severe pain later in life. Because the patient was considered too young for artificial hip replacement and could consider several treatment options, she was referred to Duke for consultation.

Question: What procedure was recommended to treat the patient’s hip pain?

As a joint-sparing procedure, PAO offers a solution to motivated patients seeking relief from chronic hip pain. When it is used to treat early-stage hip dysplasia, Olson says, PAO has been shown to reduce pain and preserve hip function for many years.

PAO is a procedure in which the acetabulum is surgically cut free from the pelvis and rotated into an improved position for hip function. The socket is fixed in position with screws, and the bone is allowed to heal so the patient can resume activity. PAO is not a common surgery. Duke is one of only a few centers on the East Coast regularly performing the procedure.

PAO attracts interest from active younger patients. About three-quarters of the patients seeking the surgery are women. It is also the most common hip-sparing procedure for younger patients with symptomatic hip dysplasia, who typically range in age from the upper teens to mid-40s.

Hip pain in young patients is often accompanied by injury to the acetabular labrum, the specialized tissue that lines the rim of the hip socket. Severe pain is often associated with tears to the labrum.

“Patients are highly motivated to get relief, and the surgery offers an early intervention to prevent a lifetime of painful joint problems,” Olson says. PAO helps to rebalance the relationship between the ball and socket of the hip joint.

In patients with congenital dysplasia, the ball of the hip joint does not perfectly fit in the socket. “The bones didn’t quite form correctly, so the ball tries to escape from the socket during movement,” Olson explains. “This stresses the joint and can damage the cartilage.”

Olson and his team used hip arthroscopy to assess the patient’s hip socket before osteotomy and to allow repair of the injured acetabular labrum. Following the arthroscopic procedure, surgeons cut the pelvis around the hip joint. Pins were inserted to secure the joint during healing. The patient was maintained in controlled hypotension to reduce blood loss.

“She’s had a terrific outcome,” Olson says. “The cartilage of the joint was healthy and in good condition, which is important for future joint health.”

Two years after the surgery, the patient returned to have the screws removed, an option preferred by some patients. She returned to Nepal and is hiking the mountains again.