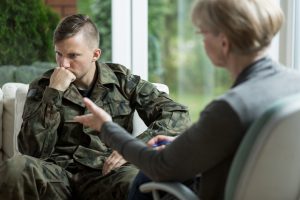 The randomized clinical trial is the largest to date to examine an evidence-based treatment for active-duty military service members, with 268 participants from the US Army’s Fort Hood in Killeen, Texas. Findings were published in November 2016 in JAMA Psychiatry.

“Some people think you have to go to therapy for years to address PTSD, but in this large-scale clinical trial with cognitive processing therapy, we saw a large percentage of patients show significant improvements and even recover from PTSD in a matter of weeks,” says Patricia Resick, PhD, the study’s lead author, who developed cognitive processing therapy in the 1980s for people who had experienced rape and other interpersonal trauma and is now a professor of psychiatry and behavioral sciences at Duke.

Cognitive processing therapy examines how an individual thinks about a traumatic event and how that affects their emotions.

“Many people think there’s something they could have done differently to prevent the trauma,” Resick says. “We teach them how to examine their thoughts and feel their natural emotions instead of feelings, such as guilt or blame, that may result from distorted thinking. We go back and look at the evidence. Once they think in a more balanced, factual way, their emotions and symptoms of PTSD subside."

To measure effectiveness in active-duty military members, the trial was established through the STRONG STAR Consortium, a multi-institutional initiative funded by the US Department of Defense that seeks to develop and evaluate effective prevention, detection, and treatment of combat-related PTSD.

For all participants, PTSD-related symptoms, such as nightmares, intrusive thoughts, and being easily startled, significantly improved. Those who attended individual therapy saw more significant improvements in the severity of their PTSD symptoms, and the improvements were seen more quickly, Resick says.

The study also showed that whether participants received group or individual therapy, they had equal reductions in rates of depression and suicidal thinking. These results continued through a 6-month follow-up period.

The findings, although encouraging, show that many participants still had lingering symptoms after 6 weeks of treatment, and approximately one-half still met the diagnostic criteria for PTSD.

Future research will allow researchers to refine the therapy, considering any specific adjustments for active-duty military service members such as varying the number of weeks patients would participate. Researchers with the STRONG STAR Consortium will also expand on the research by evaluating the roles of substance abuse and traumatic brain injury on patient outcomes.