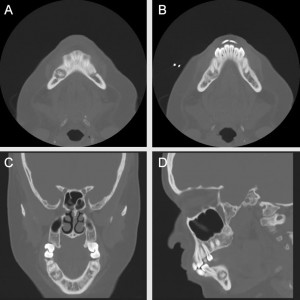 A 37-year-old African American woman presented for evaluation after a routine dental x-ray showed a mass in her right mandible that was confirmed by a Panorex. She was asymptomatic except for mild soreness on the overlying mucosa that she noticed the day before the consultation. She had no tooth pain, swelling, bleeding, neck lumps, fevers, chills, or weight loss. She had no prior similar episodes and no recent dental problems or procedures.

Physical examination revealed no deformity in her external facial features and no visible or palpable expansile lesion of her mandible intraorally. All teeth had normal sensation to percussion, palpation, and temperature except for questionable thermal sensitivity of tooth #29. She had no apparent odontogenic disease or neck masses.

What conditions would you consider, and what diagnosis would you make?

Answer: Several conditions were considered, but it was ultimately determined that the patient had focal cemento-osseous dysplasia (FCOD).

Duke physicians Marisa Ryan, MD, Liana Puscas, MD, and David Powers, MD, saw the patient and determined that the mass was a fibro-osseous lesion. Fibro-osseous lesions are caused by the replacement of normal bone architecture by fibroblasts and collagen fibers that contain variable amounts of mineralized material.

The most common type of fibro-osseous lesion is cemento-osseous dysplasia—a completely benign lesion that is likely reactive (the term dysplasia does not connote cancer potential). It classically consists of multiple small, gritty, adherent fragments without a true capsule; thick trabeculae; and interspersed free hemorrhage. It is most common in female and African American patients and typically presents in the fourth and fifth decades of life, with a mean age at diagnosis of 38 years.

Cemento-osseous dysplasia can be either focal (also called periapical, localized to one area) or florid (extensive involvement or multiple lesions); both types of lesions have the same histologic findings.

Although this patient’s age, ethnic background, clinical presentation, and radiographs were most consistent with focal cemento-osseous dysplasia, Drs. Ryan and Puscas had to rule out another type of fibro-osseous lesion: cemento-ossifying fibroma.

Although radiography alone can sometimes confirm the diagnosis, a biopsy was required in this case. During the biopsy, the right mental nerve was identified and preserved, the bone was incised, and the lesion was curetted for permanent pathology. The pathology report for the specimen indicated that it was most consistent with cemento-osseous dysplasia.